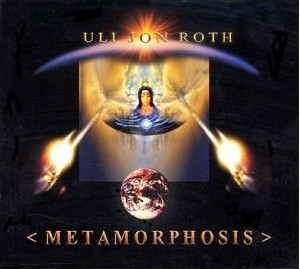 Every once in awhile I stumble upon a CD that is a pure joy to listen to from start to finish, one I can’t stop listening to, where I can’t get the music out of my head even long after the banality of life has forced me to remove my headphones. Uli Jon Roth’s Metamorphosis is such a CD—an aural treat from start to finish, pure ear candy!


Uli Jon Roth got his start in the German metal band, Scorpions, back in 1972. During his six year tenure in Scorpions he displayed a strong Jimi Hendrix influence and both psychedelic and neo-classical tendencies which eventually led to his departure from Scorpions in 1978 to pursue a solo career that would allow him to stretch out in ways he hadn’t been able to within the context of his former band.

Initially Roth struggled to find himself musically walking a tightrope between his Hendrix influenced psychadelia and neo-classicism. But in the first few years of the new millennium he finally seemed to find a style that suited him perfectly, an interesting fusion of psychadelia, heavy metal, and neo-classicism. It’s in Metamorphosis that Roth’s fusion of those styles was fully realized.

Metamorphosis is Roth’s “interpretation” of Vivaldi’s Four Seasons. Backed by the fifteen-piece Sky Orchestra, Roth is at his absolute best in this brilliant fusion of musical styles. He has a sense of melody and adventure, putting his own spin on Vivaldi, making it sound new and fresh, as if it were written today and not in 1723. The first 13 tracks feature Roth sticking close to Vivaldi’s original and the final 14 tracks feature Roth’s re-imagining/re-interpretation of Vivaldi’s work, which at times sounds reminiscent of some of the more familiar work of Trans-Siberian Orchestra. But the album is best enjoyed when listening start to finish without interruption—or at least the first 13 or final 13 tracks should be listened to in single sittings.

The only drawback to this exceptional CD; and it’s one that’s, quite fortunately, easy to completely ignore are the spoken word intros to several of the pieces. Roth was/is a consummate flower child, and his neo-hippy spoken word intros don’t really add anything to the exceptional music, and without headphones they’re often not even audible over the nature sound effects Roth used for “background” during those intros.
This CD does beg the question, what more musical adventures does Roth have up his sleeves, and when can we expect another brilliant offering such as this one? Hopefully, this isn’t an isolated occurrence for Roth as he’s truly found his musical niche.

Pop-prog from an ex-Scorpion would be Very easy for me to overlook, but I might just seek this out. (We call that kind of introduction "Moody Blues/COURT OF THE CRIMSON KING" Syndrome, after the two most embarrassing, nearly fatal cases of the affliction...well, at least King Crimson got better.)