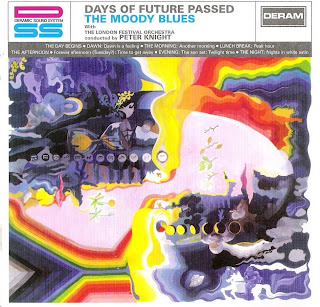 Lush and beautiful from start to finish the Moody Blues Days of Future Passed is possibly the very first progressive rock album, not to mention one of the first successful concept albums. Ambitious, adventurous, and symphonic—while a product of its era Days of Future Passed has, for the most part, aged remarkably well.

The album is a delightful mixture of late sixties psychedelia and symphonic rock. The symphonic pieces performed by the London Festival Orchestra which was conducted by Peter Knight. Knight wrote most of the orchestral pieces around musical themes that had been written by Moodies Justin Hayward, Ray Thomas, Mike Pinder & John Lodge.

Admittedly some of the rock pieces are moderately dated but with new mixes they have also remained relatively fresh.

Initially Deram Records approached the Moody Blues to record a rock version of Dvořák’s New World Symphony. Little did they know that the Moodies had already started writing Days of Future Passed around a live stage show. The basic concept, a musical journey of the passage of time from day to night was nearly doomed to failure before recording even started. A combination of symphonic music with rock had never been done before, at least not to the extent that the Moody Blues were planning. Understandably the executives were wary—properly executed Days of Future Passed did have tremendous potential, but improperly executed the album had the potential to completely alienate fans of both rock and symphonic music. The risk of failure was tremendous.

Despite the odds stacked against them, the Moody Blues made it work. Days of Future Passed was a commercial and critical success thus paving the way for bands like Yes, Pink Floyd, Genesis, King Crimson, and Emerson Lake & Palmer to release similarly musically adventurous albums in the late sixties and into the seventies. Had Days of Future Passed failed chances are record label execs would have been reluctant to bankroll the musically adventurous albums of the aforementioned prog rock bands and thus deprived the listening public of some truly fantastic albums.

While the Moody Blues didn’t quite get it perfect, they got it right and they were the first to do so successfully. The Beatles may have had Sgt. Peppers and many may consider that as the first concept album. But it could be argued that Sgt. Peppers concept only bookended the album whereas the Moody Blues remained true to the concept from the start to the finish of Days of Future Passed making it truly the first concept album.

Days of Future Passed can also be considered part of a trifecta of albums that really motivated the shift from singles-oriented to album-oriented releases. Prior to 1967 many albums were merely collections of singles with filler material. On the first handful of Beatles and Beach Boys albums the songs were largely inter-changeable. That is to say any singles from any of their albums would just as easily have fit on any of their other albums. With the Beatles Sgt. Peppers Lonely Hearts Club Band, the Beach Boys Pet Sounds, and the Moody Blues Days of Future Passed there was a definite shift to individual songs being pieces of a greater whole—the whole being greater, not equal, to the sum of its parts.

Good point about how this LP helped make albums the primary source for music. Two others who contributed to making long players the dominant form were Bob Dylan and Simon & Garfunkel. Neither were prog-rockers but their albums were traditionally all killer and no filler too.

I played DAYS OF FUTURE PASSED until I wore out the grooves! I break out the CD version on a regular basis. Great music!

Justin Hayward was barely out of his teens when he joined. He brought a few signature tunes along with him, too.

I have a huge crush on music from the late 60s and early 70s. My wife thinks I was born too late. This is the only Moody Blues CD I have and I love it. "Cold hearted orb, that rules the night..." I remember how much my teenaged mind was opened when I first heard the entire album. Brilliant. Saw the Moodies live with Chicago in the 1990s. [Thus bringing in my obligatory CHI reference.]