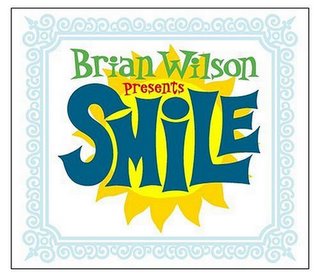 There's a bit of a hullabaloo be bandied about regarding the release of Smile yesterday. The album was supposed to have been released by the Beach Boys back in 1967 and was rumored to have had the potential to impact the music industry just as much as (if not more than) Sgt. Peppers.

That being said this is a Brian Wilson, not a Beach Boys release-- this was Brian's baby- his brainchild, his teenage symphony for God.

The Beatles and Beach Boys both started out making simple bubble gum pop and shifted with major groundbreaking releases, The Beatles had their Sgt. Peppers and White Album-- the Beach Boys had Pet Sounds. The Beatles were able to re-invent themselves and change their image, but-- for whatever reason, it seems the Beach Boys were never able to shake the "bubblegum pop" mentality they had thumbprinted on the American psyche.

I'm left wondering if Smile had been released by the Beach Boys back in 1967 as originally planned if they might have shaken off the wholesome "Be True to Your School"/surfing/girls/cars image which had made them so popular initially. I wonder if their successes might have eventually surpassed that of The Beatles.

Instead, we're left wondering "what if" and given a glimpse inside the mind of a modern musical genius. Despite having entered the twilight of his life, Brian Wilson's music still exhibits a child-like awe of the world around him. I think his music speaks to so many people, because deep down inside, most of us miss our childhood and both envy and relate to a man who never lost that youthful idealism, a man who is able to make music that is at the same time-- simple, complex, and absolutely beautiful.
Posted by Perplexio at 11:10 AM