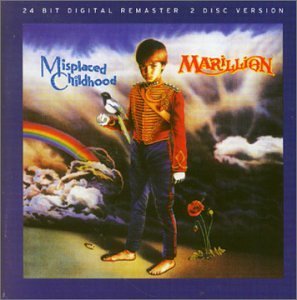 Misplaced Childhood is one of those albums that, if you grew up on the wrong side of the big pond, you might have missed in the cocaine-powered perpetual motion haze of the eighties.

The story of the writing and recording of the album is a Lewis Carroll-esque fairy tale which is highly detailed in the CD sleeve of the new 2 CD 24 bit re-mastered version of this 1985 gem. After receiving a letter from an old girlfriend with a tab of acid and the not-so-subtle suggestion to ingest the envelope’s contents, the cover art and many of the lyrics were inspired during the subsequent acid trip taken by then lead singer, Fish (a.k.a. Derek Dick).

For those of you who did miss it the first time around, this concept album focuses on a loss of innocence or, as the album title suggests, a “misplaced childhood.” Fish has a flair for imagery, it’s his trademark and makes his lyrics very distinct. This album displays him in true form:

Fish is able to accomplish in words what many artists try and fail to accomplish with paintings and drawings—he paints lush and vivid pictures on the blank canvas of the mind’s imagination. Coupled with the exceptional musicianship of Steve Rothery, Pete Trewavas, and Mark Kelly this album makes a strong musical and lyrical statement from start to finish.

This re-release makes the package even sweeter by the 24 bit re-mastering, copious liner notes featuring lyrics, stories, and full album credits. Putting an exclamation mark on the re-release is the second disc containing rarities, demos, and alternate mixes.

So close your eyes, pop in disc one, and let Fish’s lyrics take your imagination on a wonderful journey, and maybe you too will find your own “misplaced childhood.”
Posted by Perplexio at 11:30 AM

I agree with everything you said in the review. The re-release sounds great with all of the background information. The vinyl only contains the lyrics, kind of upsetting after reading this.

Jeff: this is an excellent remaster. These guys really know how to treat their fans.