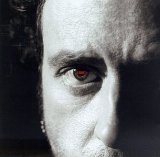 On his third and probably most emotionally charged solo album Toto guitarist, Steve Lukather took his game to a new level. The very title of the album, Luke, is the first indication that this album is a more personal endeavor than his previous 2 albums. Using his more personal moniker as an album title is the opening of the door to give the listener a glimpse of a man coming to terms with a recent divorce and the new life he was about to embark on.

Unlike his über-polished eponymous debut in 1989 and 1994’s Candyman, Luke exhibits a raw energy- an exposed nerve if you will. With darker themes of pain, abandonment, and betrayal the polished sound would have seemed out of place on the emotional journey Lukather chooses to take his listeners on this time around.

The album starts with a sucker punch: “Blue eyes, black skies, clouds filled with pain, disguise the emptiness, the disdain” in The Real Truth. This song is that moment after any relationship that’s already ended when the shock has passed and you’re forced to come to grips with the fact that it’s over.

Misery loves company. When hearts get broken we tend to will that pain upon the person who caused the hurt. “Wish I could feel bad for you, feel anything after all I’ve been through, I’m not as strong as I seem, while your heart is beating, I’ve got this broken machine.” Broken Machine and Love the Things You Hate is every venomous word you’ve ever thought after someone as broken your heart.

After 4 hard driving songs, Lukather slows things down with the melancholic Hate Everything About U, arguably one of the best songs Lukather has ever performed:

Few other songs have ever expressed so well that hate really isn’t the opposite of love. If anything, this song demonstrates it takes just as much energy to hate as it does to love. Sometimes only when trying your hardest to hate someone do you truly discover how much you really loved that person.

On the flip side is Lukather’s middle finger at the whole mess, Always Be There For Me. Full of piss and vinegar from start to finish it sums up all of the anger, hurt, and bitterness the rest of the album touches on. If any song sums up the mood of the whole album, this is it:

All in all what makes this album work so well is the way each song sounds like a duet between Lukather the singer and Lukather the guitarist. And while this subject matter has been covered by numerous other poets and musicians over the years—the rawness of Lukather’s voice and the fevered crunch of his guitar makes it seem fresh and new and just plain honest. This is the soundtrack for all of those bitter break-ups we find ourselves on the receiving end of. ***** (out of 5)
Posted by Perplexio at 5:23 PM