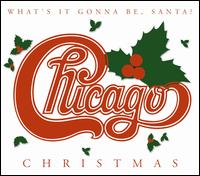 In 2003, Chicago re-released their 1998 Christmas album XXV with 6 “bonus” tracks. This 20 song Christmas CD is the result. In addition to adding 6 tracks, the band opted to shuffle the order of songs, in some cases, to the album’s benefit, and in other cases to its detriment.

While its predecessor started with a bang—Little Drummer Boy, this version starts with Winter Wonderland. While it’s a fun track, it doesn’t have quite the same punch as their exceptional arrangement of Little Drummer Boy. And maybe it’s just me, but towards the end of Little Drummer Boy the horn chart sounds like it was lifted from Joy to the World—and when I say Joy to the World I don’t mean the classic carol. I mean the Three Dog Night seventies mega-hit about everyone’s favorite bullfrog named Jeremiah. Whether this is tip of the hat to Chuck Negron and company, a subtle jab at Three Dog Night, a silly coincidence, or my overactive musical imagination is beyond me.

Much like the original release, this re-release features another vocal surprise. “Newbie” (well, he’s been in the band since 1995, but in a band that’s been around since 1967, I think that still warrants being referred to as a “newbie”) guitarist, Keith Howland takes a turn on lead vocals for Jolly Old St. Nicholas, one of those six aforementioned “bonus tracks.” Their upbeat, rocking arrangement of Jolly Old St. Nicholas is an interesting departure from the otherwise “safe” Christmas album. Howland sounds confident both behind the microphone and on the guitar.

While a nice addition, to this re-release, This Christmas may fail to disappoint, but it also fails to excite this listener. Despite Jason Scheff’s pleasant vocals, this arrangement plays it a bit “too safe” and fails to do anything that sets it apart from any other version of the song, making it otherwise forgettable.

Much like the original release, the low-point of this re-release is Feliz Navidad. The original is a rollicking, catchy, and fun song. When I first heard Chicago had opted to cover the song I was excited and really looked forward to hearing it. When I finally heard it, I couldn’t have been more disappointed. The once vocally adventurous Robert Lamm has grown quite boring indeed. This arrangement of Feliz Navidad sounds like how Wayne Newton might sound singing a funeral dirge. The re-release could only have benefited from the exclusion of this musical abomination.

One of the other bonus tracks, Bethlehem, an original tune written by vocalist/keyboardist, Bill Champlin and his wife Tamara is a catchy tune which would have the potential to become a Christmas standard if not for better publicity and promotion. The song is from the perspective of the 3 wise men journeying to Bethlehem. The vocals are shared by Champlin, Jason Scheff, and trumpeter Lee Loughnane taking another turn on vocals. Each vocalist sings from the perspective of a different wise man which makes the song that much more interesting and memorable. Of all the additions to the re-release this one is probably the most welcome.

Robert Lamm takes another turn on vocals for The Christmas Song, his lounge singer-esque vocals complement this song far better than the aforementioned Feliz Navidad. The horn arrangement and uptempo rhythm also help prevent the song from regressing into a funeral dirge.

Rudolph the Red-Nosed Reindeer is given the same gritty soulful performance that Santa Claus Is Coming to Town was given on the original release. While I normally can’t stand either of these songs as they are obnoxious and probably some of the most overplayed secular carols ever conceived by the human imagination, Bill Champlin at least makes Rudolph the Red-Nosed Reindeer listenable—no small feat by any stretch of the imagination. Unfortunately, even as much as I love Champlin’s brand of blue-eyed soul, not even his gritty soulful performance can rescue Santa Claus Is Coming to Town—another track whose absence would only have served to benefit this re-release.

O Come All Ye Faithful is sung with a soft and gentle reverence by Jason Scheff. His soft tenor is an excellent match for this traditional hymn. The way it’s performed seemingly as a duet between Scheff and Walt Parazaider’s flute adds to its charm.

Chicago’s arrangement of Have Yourself a Merry Little Christmas has made it one of my favorites, not just on this CD—but a favorite of the entire season by ANY artist. Bill Champlin, who has a tendency to oversing many songs puts just the right amount of soul into this song. He refrains from the vocal theatrics which he has come to be known for during many of Chicago’s live shows in recent years and keeps it simple letting Keith Howland and James Pankow’s arrangement speak for itself.

Sleigh Ride, yet another of the 6 “bonus tracks” to grace the re-release is one of the most fun and upbeat arrangements I’ve heard of the song. The juxtaposition of Lee Loughnane’s vocals on the verses and Jason Scheff’s vocals on the choruses keep the song upbeat, fun, and interesting.

Gathering their children, Chicago formed a “children’s choir” to perform 2 songs on the original Christmas release. While the novelty is fun at first listen, generally people are only truly interested in children’s choirs if they are somehow related or have some vested interest with at least one of the children in that choir. Generally, the lack of bass and baritone vocals in a children’s choir causes them to come across at a pitch which is at best annoying, and far too often, painful to listen to. The 2 songs featuring the children’s choir, Child’s Prayer and One Little Candle fall into the latter category. Without a vested emotional interest in the children’s choir I found those tracks worthy of only a single listen. They’ve fallen victim to the “skip” button each time since.

On the whole this is a solid Christmas album. While many Christmas CDs come across as “same ol’, same ol’” with only the occasional diamond in the rough—this offering features far more diamonds and much less rough than much of the other holiday fodder offered to the masses in the ever growing Christmas holiday season. Despite my strong negative feelings towards certain tracks, I truly enjoy the album as a whole and recommend it to anyone looking to expand their holiday music collection.
Posted by Perplexio at 1:32 PM