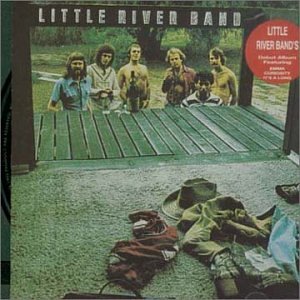 In 1975 Little River Band burst upon the musical landscape-- their style was a laidback country rock that would not have sounded out of place coming from the Eagles or the Doobie Brothers.

Perhaps the only true fault of this auspicious debut is that it opens with its strongest tracks-- probably one of the strongest tracks in the band's entire song catalog. Clocking in at 8 minutes and 46 seconds A Long Way There showcases the best of what this band has to offer. Their catchy country/rock rhythms, their tight vocal harmonies, Glenn Shorrock's distinct lead vocals, and the rock guitar theatrics of both Graeham Goble and Beeb Birtles.

By opening with such a stellar song, the rest of the tracks only serve to suffer by comparison which is quite unfortunate considering that many of the remaining tracks are also quite enjoyable.

Curiousity Killed the Cat straddles the rock/country line with country-esque vocals and vocal harmonies but with meandering yet driving rock guitar lines.

Other standout tracks include the Beeb Birtles penned and sung I'll Always Call Your Name a rather stirring ballad that shows Birtles to be quite a tunesmith in his own right and the somewhat elegeiac Statue of Liberty that captures the general pessimism of America following the Nixon resignation and the Vietnam conflict:

Anything can happen in the U. S. of A.
Ain't no use anymore in tryin' harder
Statue of Liberty sinkin' in the harbour

Despite living half a world away in Australia Glenn Shorrock seemed to have a good idea of the general mood of the American people.

On the whole, this is a very respectable debut that shows glimpses of the even better material that was yet to come. While there are no big hits like The Night Owls, Reminiscing, or Lady-- those would all come later, you can clearly hear the potential of the music which would come from this tight Aussie musical unit.

I have this album, and you've got it just right. The album's a really promising debut, but for me it just misses at least one, maybe two standout songs. I like the relaxed feel of it though.

It's A Long Way There is such a stellar track, but there's nothing else on the album to balance that out. It's one great song and 8 good songs.

I do really enjoy Statue of Liberty as well, though.

I love Little River Band...it's great music to play when you're in the car out for a long drive.

Phoenix: Yeah, now that you mention it, LRB music does kind of have a "road trip" feel to it.

I haven't heard this album in years but there was a time I loved it to death. "It's A Long Way There" is great and so is "Meanwhile." They are another band who "sold out" early. Their next album, Dimantina Cocktail was great too, but by the time they got to their 3rd LP, Sleeper Catcher, it was over.

Charlie: I actually really like their Time Exposure album and I LOVE the 3 albums they did with John Farnham on lead vocals: The Net, Playing to Win, and No Reins.