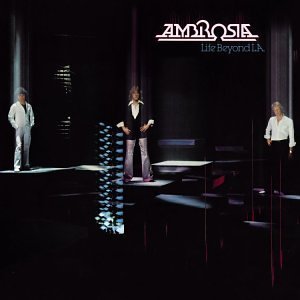 While not as strong as their first two albums, Life Beyond LA still bears many of the prog-rock elements and flourishes that their fans had come to know and expect from them.

At the same time the album is superior to its predescessors in that it is far more successful in its marriage of prog-rock with pop elements. While their first 2 albums were rather firmly rooted in progressive rock there's more of a pop influence on this outing. And despite the absence of producer Alan Parsons who had helmed their first two albums, this album still bears the trademark symphonic lushness that the first two albums also had.

The songs tread upon a common melancholy ambience. It strikes down the positive illusions of life in LA and focuses more heavily on the negative sides of the city of angels. There are strong jazz influences throughout the entire album, but nowhere are they more evident than on Apothecary, essentially a love song from a junkie to his "apothecary," which has some beautiful jazz guitar flourishes by David Pack.

One of the strongest tracks and a bit of a commercial breakthrough for them, How Much I Feel, features the stellar vocals of the multi-talented, multi-instrumentalist, David Pack. While it is a love song to "the one that got away" that might come across as trite if sung by a lesser musician, Pack manages to insert enough passion into his vocal delivery to give the song conviction, not to mention a bit of soul. Unfortunately, the success of this song was a double-edged sword leading the band to all but abandon their prog-rock roots for a more pop-friendly sound.

This album is a portrait of a band in transition, chasing a new musical direction-- at its best it's an excellent symbiosis of prog-rock and pop, at its worst it's a significant departure from the direction Ambrosia travelled on their first 2 albums.

Just seeing the cover of this album transports me back to a time and place of happiness. LOVED every song on this baby and still listen to it (via iPod) often.

Thank your for callign attention to another often forgotten band.

I'm putting it on right now! Then I will cry my mascarra off listening to "How Much I Feel" and "Holding on to Yesterday"

I don't know how this whole business started......

This is a band that somehow missed out on -- I only know Ambrosia from the hit "The Biggest Part of Me" (or something like that) and never would have called them even semi-prog.

Barbara: I really dig their first 3 albums. I've reviewed 2 out of 3 of those, I still have to do a review of their 1975 self-titled debut.

David: Yeah Biggest Part of Me and You're the Only Woman were from their more pop-friendly era that came after this album. Even How Much I Feel on this album is more pop than prog, but given the overall strength of the rest of the album, that's forgiveable.

Thought you'd like to see the current Ambrosia playing killer versions of some of their Classic songs from
a live performance on the Drum Channel October 20, 2009.

Holdin On To Yesterday
http://www.youtube.com/watch?v=0j2BI3BHhII

Time Waits For No One
http://www.youtube.com/watch?v=Ry8tHxEWd1E