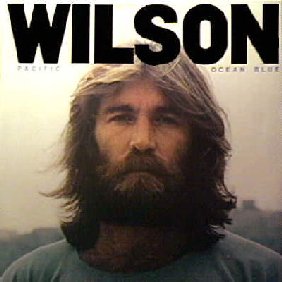 Brian had the production and songwriting talent, Carl had the angelic voice-- with a family as talented as the Wilsons, it's no wonder Dennis got lost in the mix. It was to the Beach Boys and the listening public's detriment that he was so often-overlooked.

Dennis was a mediocre drummer at best. On many of the Beach Boys albums it was actually Hal Blaine playing drums, not Dennis. But what his brothers and bandmates didn't realize was that Dennis had something to say and if Pacific Ocean Blue is any indication, in the Beach Boys, Dennis was 2nd only to big brother, Brian, when it came to songwriting prowess.

Hiding the perceived "lesser-talented" brother behind a drum kit was perhaps one of the Beach Boys greater fallacies. While, they were generally correct about his sub-par drumming, assuming that lack of talent also translated to vocals and songwriting is where the Beach Boys went wrong.

Over the course of the seventies, Wilson had stockpiled quite a repertoire of songs, a handful of which ended up on Pacific Ocean Blue and another albums worth that were to have been his 2nd solo album, Bamboo. These songs show a much different side of this Beach Boy-- and truthfully, none of this material would have sounded quite "right" within the confines of the Beach Boys tight vocal harmonies. There's a rawness and an urgency to Dennis' solo material that was conspicuously absent on much of the Beach Boys seventies material.

There are no standout tracks, as this whole album is a stand-out album. All of the songs on the album are equally impressive and worth listening to. And while brother Brian's influence is obvious on several tracks, Dennis certainly makes this material his own. From the catchy groove of Dreamer to the wistful melancholy of the ballad Thoughts of You, or the vastly underrated album opening River Song. This album is a delicious slice of seventies California rock/pop.

Unfortunately, this album is long out of print-- if there's any justice in the world, Brian will use his recent resurgence in popularity to help campaign for this album's re-release. This album tops the list of long out of print albums that NEED to be re-released (It is an essential album for any collector of great classic rock. It's also an excellent candidate for being remastered for 5.1 Dolby Surround DVD Audio release).
Posted by Perplexio at 11:24 AM

Thank you for remembering Dennis. Your taste is only surpassed by your generosity as a human.

I always loved the Beach Boys, even more than Chicago.

while it is true he was a mediocre drummer unfortunately Dennis missed most sessions, not because he lacked talent, but because he frequently was in no physical condition to record. Also, he really didn’t like recording that much.

However, I’ve been reading for 20 years that Pacific Ocean Blue is one of the great lost albums of all time and rivals anything The Beach Boys did as a group. Dennis had great composing talents he never showed very often. I’ve never heard this album but I would love to.

It’s too bad he man led the drug addled depraved life that he did. It could have all turned out so differently.