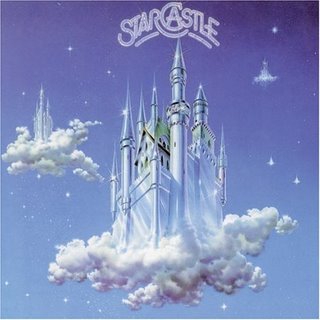 In the mid seventies there was a bit of an American backlash to the British progressive rock movement pioneered by the likes of King Crimson, Yes, and Emerson Lake & Palmer. American groups like Styx, Kansas, Fireballet, and Starcastle rose in the wake of their British progenitor's success.

While Styx and Kansas are rather well known even today, Starcastle never matched their success nor their longevity. Upon first listen, one will notice vocalist Terry Luttrell's unique mastery of Jon Anderson's vocal style. It's uncanny to think that Luttrell had been fired from his original gig-- lead vocalist of REO Speedwagon-- because he wasn't "good enough." His vocals with Starcastle are far more listenable than his REO successor, Kevin Cronin's, ever were or will be.

Unfortunately, due to their timing and their uncanny similarities to Yes, they're considered largely derivative of Yes and Yes's style. But, if imitation is the highest form of flattery, Yes should be honored that a group of musicians as skilled as those in Starcastle saw fit to extrapolate upon the style of The Yes album and their other early material.

While the musicians of this band are not of the same calibre of the likes of Howe, Squire, Wakeman, or Bruford-- a little Jon Anderson goes a LONG way, so it's Luttrell's vocals which help make Starcastle's material imminently enjoyable and utterly listenable. Another benefit of their music is that it leans more to the rock and less to the prog side of things-- making their music a bit more accessible to the casual listener than much of Yes's material.

Generally speaking, if you're a Yes fan-- chances are you'll find Starcastle derivative and disappointing. However if you respect Yes's music but find much of it to be a bit TOO progressive (or find Jon Anderson's voice to be a bit too much), Starcastle may be just what the doctor ordered.
Posted by Perplexio at 10:58 AM

hey there,
thanks for stopping by my Blog and comments etc. i will stop by again to read in more depth and comment later, right now i am in a lot of pain with my stupid tooth and don't feel like doing much.

Afraid that I have never heard of Starcastle, but they sound interesting.

I like Yes and have a few of their CDs, also Anderson, Bruford, Wakeman & Howe. But I'm not familiar with Starcastle.

Glad to see you're still doing the reviews.