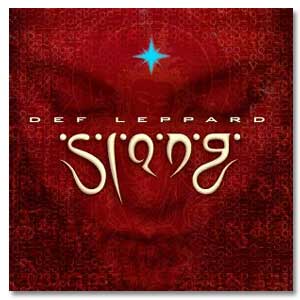 By the mid-nineties the very style of music which had made Def Leppard's Pyromania (1983) and Hysteria (1987) albums so popular was as good as dead. After hiring former Dio guitarist, Vivian Campbell to replace the late Steve Clark, Def Leppard opted to re-invent themselves in the image of the music of that era.

Disposing of not only the logo but also the bombastic, fun, over-the-top glam/hair metal that had graced all of their previous albums the Lep entered uncharted territory.

While some may argue that Slang was a failed experiment-- credit must be given to Def Leppard for at least attempting to reinvent themselves, rather than sticking to the same tried and true formula of their previous albums.

Other than the title track, there's nothing on this album that would have fit on any other Def Leppard album. The musical style is more spare, minimal, and generally "naked." Some would say that the greatest flaw of Slang is that much of the music is far too serious or too dark. People who were expecting the fun of Rocket, Rock of Ages, Pour Some Sugar On Me, or Armageddon It instead got songs that dealt with death, suicide, and other similarly somber topics. This wasn't the Def Leppard the fans had come to know and love in the eighties and the resulting lukewarm reception was quite evident in its modest sales.

Stand-out tracks include Breathe a Sigh (which has my favorite misheard lyric EVER*), Slang, Work it Out, Pearl of Euphoria, and Where Does Love Go When It Dies. But, that being said, this isn't a singles album-- the album as a whole is actually greater than the sum of its parts.

With over ten years having passed since Slang's release one can offer a bit more objectivity-- hindsight, if you will. While this wasn't the "fun" Def Leppard of the eighties it, very likely, was an album the band HAD to make. Prior to this album, the band hadn't really dealt with the death of guitarist, Steve Clark. As much as it is a change of direction, it was the band's way of getting past Clark's death and moving on with their lives.

Three years later with Euphoria the band would get back to that fun-loving, happy-go-lucky pop-metal of the Hysteria era. But sometimes a band needs to take a step in a different direction, a personal re-evaluation, before they can move forward. Slang was just that for the Lep.

Yeah! I've been waiting for a post from you! I'll read it in a bit, I am having computer issues!!

YOu mean it's not "I mow the lawn for your affection?" DANG!