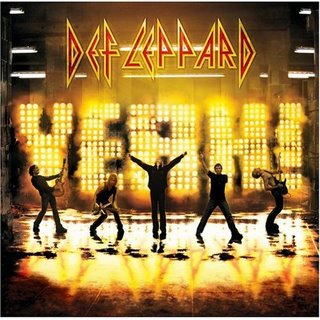 Def Leppard is fun, they always have been, their new album Yeah! is no exception. Generally cover albums are “stop-gaps” to buy time for the band to finish working on original material without the band falling out of the public spotlight. Generally they’re hit or miss, and many fans consider them “cop-outs”—after all we fans have heard the same old song before. We want something new!

What makes Yeah! work where other cover albums have failed is Def Leppard’s song selection. These are all songs by bands that influenced the various members of Def Leppard in their youth. With many of the groups/musicians they chose to cover—they didn’t go with the obvious—with T-Rex a lesser band would have covered Bang a Gong (Get It On), Def Leppard chose 20th Century Boy; for Sweet one might expect Ballroom Blitz or possibly Fox on the Run, but they chose Hell Raiser; for Free just about anyone would expect All Right Now, but instead they went with Little Bit of Love, with ELO the obvious would have been Don’t Bring Me Down (or possibly Do Ya?), but Def Leppard instead went with 10538 Overture.

Some of these songs Def Leppard is exactly the band you’d expect to cover them—Hell Raiser is probably the most obvious. On their Retro-Active CD the Lep chose to cover Sweet’s Action to great effect. Perhaps because Sweet was to the seventies what Def Leppard was to the eighties. Pure glam-rock fun, not at all pretentious, just good old fashioned rock and roll fun (with a bit of hairspray thrown into the mix for good measure).

Other songs are less obvious, although still (in some cases surprisingly so) quite respectable covers—The Kinks Waterloo Sunset, ELO’s 10538 Overture, David Essex’s Rock On, and Roxy Music’s Street Life all fall within that category.

After 2002’s X, which bored me to tears after only a couple of spins in my CD player, I was a bit apprehensive, but the price was right and I figured after High ‘n’ Dry, Pyromania, and Hysteria Def Leppard had more than earned a second chance. These guys may not be the band to make you think about the ills of the world, their music isn’t what one might hear in a Starbucks, and it certainly will never be considered high art—but there’s already plenty of that kind of music out there. Def Leppard is fun, that’s what people listen to them for and Yeah! is just the kind of album that can re-establish their reputation with a new generation of fans.

Posted by Perplexio at 1:57 PM

EXCELLENT! Upon your recommendation I have purchased a few songs and may add more. "Rock On" has always been sort of an anthem of mine, gotta love it.

have not seen you for ages, what's shakin'?

If any band can pull off a cover album the right way, Def Lep is it. You're right when you say they're a fun band, and that's one of the reasons I've always liked them.

barbara: It's a great CD, they're the perfect band to cover T-Rex and Sweet, many of the other covers were just as enjoyable-- the biggest surprise is their cover of ELO's 10538 Overture.

dragonflyfilly: Not much shakin' just keepin' busy with the missus. :-)

bruce: The same reason I've enjoyed them for quite awhile now, back in the mid 90s High 'n' Dry was my favorite car album!

Great review, as usual. I stopped buying Def Leppard after Hysteria, but in my prep for their concert here coming up soon I may check out this coveer album. I'm sure they'll play one or two things from it, for their own enjoyment if nothing else.

David: Their post-Hysteria albums have been rather hit-or-miss with me. Adrenalize was "okay," Retro-Active had some great stuff on it-- but it also had some weak drivel on it... Slang was a "miss" (although I do respect them for having the balls to take some musical chances on that one), Euphoria was a "hit", X was a "miss," Yeah! is a "hit."

I gotta say this is one of the best covers albums i have ever heard, anyone that can pull off Paul Rodgers and Phil Lynott tunes and live to tell the story has my kudos.

I loved the rawness of the album (not too many of them backing vocals :-)

Hopefully the new album will have as much balls :-)