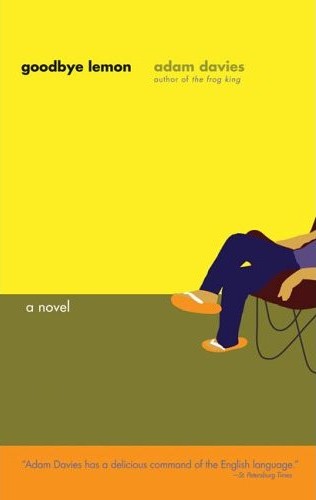 I was "burned" on Davies debut, The Frog King, I found it a rather mediocre tale. It was given to me by a coworker all too familiar with my love of Jay McInerney's Bright Lights, Big City. I gave The Frog King a try as it had a similar premise-- young writer guy in NY struggling to find himself gets his heart broken and has to re-define himself after messing up his relationship. Where McInerney succeded, Davies had failed. For all his faults, I was still able to make an emotional connection with McInerney's main character-- the same could not be said for Harry Driscoll, Davies' protagonist in The Frog King.

But I believe in giving second chances-- and after reading Davies Goodbye Lemon am I ever glad I did! Every once in awhile I'll read a book which packs a rather emotional sucker punch to the gut. I hadn't read one in awhile, so Goodbye Lemon was a very welcome and long overdue sucker punch.

The Frog King's Harry Driscoll was a rather unlikable louse who essentially got what he deserved-- he cheated on his girlfriend, she left him. Good for her-- and despite Davies best efforts to make Driscoll a likable character he really wasn't. On the flip-side, Goodbye Lemon's Jackson Tennant was an incredibly human and tragically flawed character. Sure he made mistakes, he carried with him a huge ball of hate-- a ball of hate that was everything he knew, a ball of hate based on his perception of the events surrounding the death of his older brother, Dex, when they were still children.

This is a book of love-- it's not the dime-store romance drivel. It's not romantic love at all which is what makes it so refreshing. The "guy meets girl, guy loses girl, guy gets girl back" is dime-a-dozen "dick-lit" (the male equivalent of chick-lit)-- much of it is just poor man's Hemmingway or Fitzgerald (it seems all the protagonists in those novels are modeled on Jake Barnes from The Sun Also Rises). Goodbye Lemon instead focuses much more heavily on fraternal and paternal love and how one tragic event was able to turn a family inside out and tear them apart and how it took another near-tragedy to pull that family back together.

Jack is not generally a likable guy. But his flaws are tangible and real which makes him sympathetic even in those parts of the book where one might want to reach into the pages and knock some sense into him. While the novel starts by focusing on Jack's relationship with his girlfriend, Hahva, it takes a rather dramatic shift in focus to the relationship between Jack and his brother Pressman and his estrangement from and his desire to become the antithesis of his father for whom he carries a profound hatred.

The book does have its comic moments, but essentially it's rather heartfelt and poignant in its own stark masculine way and has made it into my favorite books list-- I'd say number 4 with a bullet. So, if you're looking for something a little different than the dime-a-dozen dick-lit contemporary fiction, Goodbye Lemon is just what the doctor ordered.
Posted by Perplexio at 9:01 AM

Read this book as well. I loved it, and would definitely recommend it.

I read this novel last week and also felt that it resonated deeply in my heart and mind...