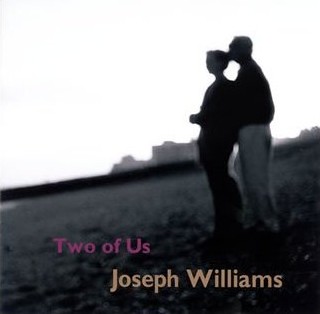 Truth be told, Joseph Williams could release an album of him singing the Greater Manhattan Yellow Pages and I'd probably love it. And while the market does seem to be saturated with covers albums, what's the harm in one more.

The Two of Us refers to Joseph's voice and the piano that accompanies him on every song. There's no drums, no guitars-- these interpretations are laid bare which allows the listener to fully appreciate Joseph's golden tenor vocals.

Admittedly some of the songs chosen for this album are head scratchers (Aerosmith's Don't Want to Miss a Thing and Celine Dion's Because You Loved Me for example), but the head-scratchers are forgiveable given Joseph's pristine delivery.

While his voice has deepened since his brief tenure in Toto (1986-1989) and he may not have the high range he once did, he does compensate for the loss of his higher range by occassionally sleeping to the depths of his lower register showing he's almost as capable a baritone as he is a tenor.

In all honesty though, there are no real surprises on the album, but this is not the type of album one would rush out and by if he or she were looking for something new or different. This is a celebration of the human voice and the piano, when laid bare there's a beauty in the simplicity of the arrangements that allows Joseph to really show off his vocal strengths.

The highlights include Now and Forever which is at least as good, if not better than Richard Marx's original version, Elton John's Your Song, Boz Scagg's We're All Alone, and the Righteous Brothers Unchained Melody.

On the whole this is that perfect CD for a quiet evening in with that someone special. Beautiful, peaceful, and relaxed music focusing on its delivery. The only real flaw is in the production, there's some feedback and distortion on some songs that should have been caught and fixed before the album's release.
Posted by Perplexio at 2:36 PM

Sounds great! Another great review from my favorite reviewer!