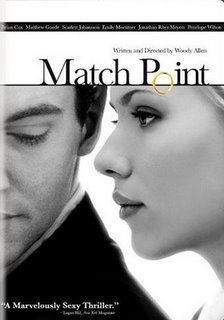 I've never been much of a Woody Allen fan. Other than one or two of his films, I can honestly say I'm not a fan of his work. I decided to give him another chance with Match Point, I figured it's his comedies I don't like, let's see how he does drama.

It's been said that Woody "borrows" heavily on other sources-- books, films, etc. I have no problem with "borrowing" if it is indeed borrowing. But to "borrow" generally implies giving credit to original sources where it is due. I saw no indication of Allen giving any credit to any of the true sources for this film. Maybe it's just me but that sounds more like "plagiarism."

The deeper I got into this movie the more recognizable it became, the plot was taken from Theodore Dreiser's literary classic, An American Tragedy. There were some subtle differences of course-- and it was set in a present day London not an early twenties Upstate New York.

And Allen isn't the first to tell this tale in film-- in the early thirties there was An American Tragedy film, and in the fifties the tale was "modernized" a bit, the names were changed as was the title (A Place In the Sun) but it was essentially the same tale. In addition to "borrowing" the plot from the original book, Allen also "borrowed" the first meeting scene from A Place In the Sun where George Eastman (Montgomery Clift) first meets Angela Vickers (Elizabeth Taylor). While Eastman and Vickers first meeting was in a posh study playing billiards, Allen's Match Point featured former tennis pro Chris Wilton (Jonathan Rhys Meyers) first meeting Nola Rice (Scarlett Johansson) in a posh study playing table tennis.

While the ending was considerably different than the ending of the An American Tragedy and A Place In the Sun, the basic plot structure remained intact-- struggling young lad falls for attractive girl with no prospects, they carry on heated affair, he loses interest and falls for wealthier girl with much better prospects. The other girl contacts him telling him she's pregnant and begs him to do right by her... Drama ensues, Climax, denoumont, etc.

If you truly feel compelled to see this film, I implore you to instead read An American Tragedy. At over 800 pages it may seem unwieldy to some-- and admittedly it does have a rather slow start, but it really picks up after the first fifty pages... Or if you are one who doesn't feel inclined to invest your time in such an expansive tome, I highly recommend the 1951 film classic A Place in the Sun over Allen's recycled and modernized drivel.
Posted by Perplexio at 11:03 AM