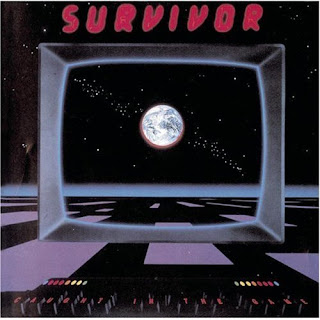 In the early eighties bands like Journey, REO Speedwagon, Asia, and Survivor not only dominated the airwaves but also filled arenas with their special blend of AOR.

A bit heavier than their contemporaries—Journey and REO Speedwagon, Survivor really burst onto the scene with a little help from Stallone and their hit Eye of the Tiger which was used prominently in Rocky III.

Caught In the Game has gone largely overlooked or forgotten by the band and by radio. None of the tracks from this album have even appeared on any of Survivor’s multiple different “Greatest Hits” or “Best Of” collections.

This oversight is quite unfortunate as Caught In the Game is likely Survivor’s most consistently strong album from start to finish. The songs are catchy and have a bit more bite than the lesser tracks from their previous albums.

The album opens with the title track, an infectiously catchy rocker and other than the ballad I Never Stopped Loving You the album doesn’t really let up from start to finish. And even that lone ballad is the 3rd track—thus getting it out of the way early—before reverting to the more mid and uptempo rockers that allowed guitarist Frankie Sullivan to cut loose a bit more.

Survivor ended up saving the best for last with the album’s closer, Santa Ana Winds, one of the best tracks the band ever recorded. With guitar solos vaguely reminiscent of some of Blue Oyster Cult’s better material of the previous decade, Bickler’s soulful vocals and the keys of Jim Peterik the song is strong from start to finish.

Today, admittedly this album sounds somewhat dated, a relic or snapshot of the early eighties. But in the context of its time, this was easily one of the better albums released in 1983. It was much to the listening public’s detriment that radio didn’t give it more attention.

(Incidentally this was David Bickler's final album with the band. After leaving for medical reasons he was replaced by Jimi Jamison. Bickler did re-join in 1992, only to be replaced in 2000 by... Jimi Jamison. Today Survivor's lead singer is Robyn McAuley. Bickler today can be heard in Bud Light Real Men of Genius commercials)

Related Link:
Survivor Caught In the Game on Amazon.com (song samples available)
Posted by Perplexio at 12:01 AM

This is a long forgotten work, an excellent album, by far their best. Thanks for bringing it back to life.

Great album. With the exception of their soundtrack smashes, and handful of singles, "Santa Ana Winds" might be their strongest song ever.
Unfortunately, the song shares a name with a giant Beach Boys hit, thus helping to bury it, like the album itself into forgotten obscurity...