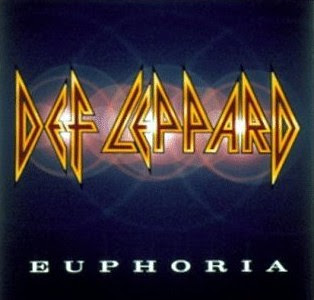 After exorcising their demons on the deeply personal (and some would argue overly somber) Slang album 3 years prior, Def Leppard seemed to have regained their footing with 1999's Euphoria.

The band seems to have picked up where they'd left off with 1992's Adrenalize, there's a fun energy to Euphoria that's reminiscent of their Pyromania and Hysteria albums. Someone apparently neglected to remind the Lep that it was no longer 1992, and while many of the songs on this album would have likely been hits in a pre-grunge era. The sonic wall of guitars and vocal harmonies that Mutt Lange had perfected as their producer on their eighties albums is certainly still there. Their tongues are still planted firmly in their cheeks with songs like Demolition Man, All Night, and Back in Your Face Again (the latter of which would not sound out of place at an NHL hockey game), and their softer side was evidently still present on songs like Goodbye and It's Only Love.

It's never been any secret that Def Leppard was influenced by the late Marc Bolan, and perhaps they've found the perfect match to Bolan's 21st Century Boy with their very own 21st Century Sha-La-La Girl. A tip of the hat to the late Bolan, perhaps?

Ten years earlier and this album would have been a huge hit to follow up on the success of 1987's Hysteria. Sadly the audience of 1999 wasn't as conducive to the fun-loving rock of this enjoyable, if underrated band. Thus the album went largely ignored by the general listening public, much to their detriment.

Posted by Perplexio at 3:43 PM