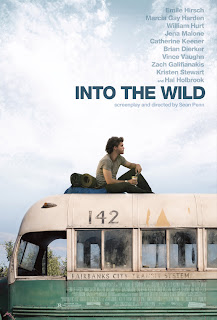 Growing up, I always found myself getting lost in books and films about surviving the elements or daunting odds; The Call of the Wild, Empire of the Sun, Castaway, Robinson Crusoe, etc. So it was little surprise that Into the Wild resonated with me.

Emile Hirsch turns a brilliant performance as Christopher McCandless, a young man with a troubled family life who opts to disappear. The film is of course about his inevitable trek "into the wild" of Alaska-- but it focuses equally on the bonds McCandless forms with the people he meets and the friendships he forges on his journey.

What makes the film so work is the familiarity established with the friends McCandless makes and the bonds he develops. These bonds help to make him that much more human and while his motives may not be easy for all to understand his basic human nature is never in doubt.

If Sean Penn continues to make films of this caliber hopefully he'll finally be convinced that he's much more skilled behind the camera than he is in front of it.
Posted by Perplexio at 5:13 PM

I love this movie! It was my favorite film from last year. It's one of the best character studies of a real person I've ever winessed. We really found out what made McCandless tick. My sister-in law wouldn't go see it because she thought it was too depressing. It's not.

Hal Holbrook was nominated for an Oscar and I was pulling for him to win it. When the credits were rolling at the end of the film my wife said that Holbrook's performance was Oscar worthy. His acting was terrific and his character was totally sympathetic. We were so glad when his nomination for "Best Supporting Actor" was announced.

I'm glad you loved this film.