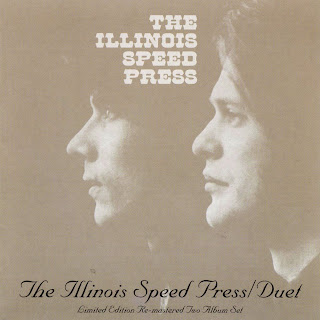 In 1970 fresh off the success of Blood Sweat & Tears and Chicago Transit Authority, producer James William Guercio took another band under his wing—Illinois Speed Press featuring the guitarist/vocalist tandem of Kal David and Paul Cotton. While ISP never enjoyed the same level of success as that of their contemporaries, they did release two exceptional albums before imploding—their self-titled debut and its follow-up Duet.

For years these albums remained an obscurity, long out of print and only ever released on vinyl LP. In recent years some fans & collectors took it upon themselves to re-master and finally give these albums the CD release they deserved. Unfortunately, due to the obscurity of these releases, that 2 CD set is now out of print as well and is as much as (if not more of) an obscurity as the original vinyl releases.

Prior to ISP, Kal David was a blues guitarist mainstay of the Chicago club circuit in his band, The Exceptions, which also featured an exceptional tenor vocalist and bass player, Peter Cetera who went on to join Chicago. Paul Cotton’s musical talents lean more to the acoustic end of the spectrum, his influences more of the Buffalo Springfield variety. The two different musical styles are quite evident on both albums as there appears to be an initial marriage of these styles on their debut followed by a more fractured tug of war between the two styles on the Duet album.

On the 2nd disc featuring Duet however you can hear the two styles competing rather than blending—two men trying to take the band in two very different directions in a disagreement that would lead to the band’s demise. While the first album exhibited more of Kal David’s influence, Duet seemed to show Paul Cotton exerting more control and many tracks exhibit the country-rock sound that Cotton would come to be known for as a member of Poco.

Following the demise of ISP as a band, drummer Freddie Page died and had the song Take Me Back to Chicago written for and dedicated to him by Chicago drummer Danny Seraphine and recorded on Chicago XI. Kal David continued taking his music in a blues-rock oriented direction initially with The Fabulous Rhinestones and later as a solo artist in his own right. And upon the recommendation of Peter Cetera, Paul Cotton was approached by country-rock band, Poco, to replace founding member Jim Messina who had left the band to form the duo Loggins & Messina.

A handful of ISP’s songs found new life as Poco songs once Cotton was well settled in that band. Get In the Wind was re-arranged to the point of being unrecognizable—Kal David’s distortion heavy blues guitar vibe was completely stripped away, the tempo completely changed and the only aspect of the song bearing resemblance to the ISP original being snippets of lyrics here and there. P.N.S. (When You Come Around) was a bit more faithful to the original and remained at least marginally recognizable—but without Kal David’s trademark blues tinged guitar—in its place a bit of pedal steel and a lot more of Paul Cotton’s acoustic guitar stylings. Bad Weather was probably most faithful to the original but again with pedal steel replacing Kal David’s guitar work. Cotton also took advantage of Poco’s stronger vocal harmonies in his later arrangement of the song.

This two disc set is a true gem, not to mention an interesting snapshot of what happens when you mix the urban electric blues influences of the Windy City, late sixties/early seventies rock and roll, and a bit of southern California country-rock into one band.

They are true collectors items. Where did you get a copy of these?

I might add that Poco has always been one of America's greatest unknown bands. They not only never received the fame they deserved, they never even had a hit.

Coincidentally, I'm going to see Poco with both Rusty Young and Paul Cotton on May 31st. If they do "Good Feeling to Know" and "Rose of Cimarron" I'll be in musical heaven.

Actually, I was wrong. Poco had 2 hit singles late in 1979, "Crazy Love" and "Heart of the Night." I should have said that their classic lineup never had a hit. It's ironic that their best days were over by the time these songs charted.

Charlie No kidding hey Poco put out so many great songs between 1971-1976 and not one of them charted. Here is a short little list Restrain, Early Times, Crazy Eyes, Keeper Of The Fire, Ride The Country, And Settlin Down. Why does it not surprise me that a sappy song like Crazy Love (great harmony not withstanding) be their first song to chart. I always remind myself the mindless masses wouldnt know good music if it hit them in the head