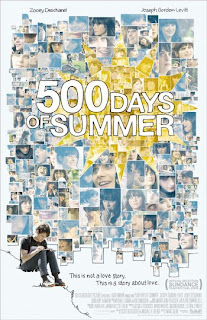 Every once in awhile Hollywood gets it right. The stars are aligned just right, the right people are cast, and all the pieces fit together just right.

Such is the case with 500 Days of Summer a romantic comedy that actually seems somewhat plausible. It captures all the stages of a relationship: Boy meets Girl, Boy falls in love with Girl, and well.... to give away any more would give away too much of the movie.

Joseph Gordon-Levitt (best known for playing Tommy Solomon on the late 90s sitcom, Third Rock From the Sun) plays Tom Hanson who believes in love, that one day he'll meet "the one," and that he'll "just know" when it's right. Enter Summer (played brilliantly by Zooey Deschanel). Everything seems to click, she has similar taste in music and films, she inspires Tom to better himself.

She must be "the one." The movie jumps back and forth between the relationship and the post-relationship as Tom desires and tries to win back Summer's love.

500 Days of Summer is at times subtle and at other times a bit more direct, much like real relationships often are. It's nice to see a film that doesn't insult the viewer's intelligence nor their emotional experience. There's no need to suspend disbelief as the film-- it's plot and characters are completely believable.

There are some amusing but at the same time completely plausible karaoke scenes that add to the overall enjoyment of the film.

If you're sick of the dime-a-dozen sameness of Sleepless with Music & Lyrics in My Mail or some other preposterous formulaic excrement that Hollywood churns out faster than an incontinent dog 500 Days of Summer will be a refreshing treat and escape from the norm.

Posted by Perplexio at 5:15 AM

Just saw it and I have to agree with you with the exception I thought it would have been nice to find out a little more of what made Summer click and why she chose the other guy over Tommy. It seemed a bit disjointed because of that for me. Otherwise I loved the flash backs and flash forwards. It was a great way to tell the story.

For personal reasons-I HAVE to see this movie!

This movie is near the top of my Blockbuster online queue so hopefully it will arrive soon.

Glad it's good-- the trailers looked cute! I'm excited for it.

I've been wanting to see this but everything triggers weird emotions lately so I've been putting it off.

Hmmm... Sure sounds interesting to me, just because I love watching comedy flicks, and Romantic comedies are way too fun to watch! I'll surely give this one a try !

I like this movie a lot, it reminds me of someone. Good.. Good..