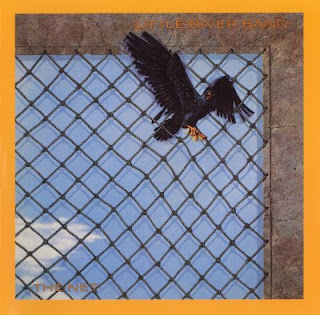 Farnham was and is a better singer than Shorrock. Unfortunately this set Farnham apart from his bandmates. Where Shorrock's voice blended nicely with Graham Goble & Beeb Birtles Farnham's voice being so much stronger stuck out like a sore thumb.

On its own merits The Net is not a bad album. It certainly has its moments. Farnham is an exceptional vocalist, the tight harmonies were still there. But the laidback country-rock vibe that had made them so popular in the late 70s was replaced with a more electric and polished pop-friendly sound.

The album starts with a bang on the horn-laden You're Driving Me Out of My Mind which would not have sounded out of place on a Chicago album. The album charges ahead on the passionate and empowered We Two that really shows off Farnham's vocal range. It was almost as if the rest of the band thought, "look at our new toy, check this out!"

While all 3 of the LRB albums with Farnham make LRB sound more like Farnham's backing band than the much more cohesive unit they'd sounded with Shorrock handling the lead vocals, the disparity is particularly noticeable on The Net.

The trademark tight vocal harmonies still make ocassional appearances on songs like Mr. Socialite and Down On the Border but even then they sound as if they exist more to prop up Farnham's vocals than a tight cohesive unit unto themselves.

Generally, this album is more for the die-hard fans of Little River Band, although casual fans of Farnham's solo work would likely also enjoy this release.

Although I didn't think much of the singles at the time - they certainly didn't get as much play as LRB's hits from the previous several years - I've rediscovered We Two and think its a subtle gem.

I'll check this album out ... And your previous review of the album really made me get some songs of their album :Time Exposure, and must say, they were fabulous !

Barely Awake in Frog Pajamas: "We Two" a subtle gem?! I don't think I've ever heard anything John Farnham has sung being referred to as being subtle. His vocals are powerful sometimes even over the top. "We Two" is a gem, can't argue with you there at all. But I don't know that I'd refer to it as being subtle.

bearockr: The Net isn't as good as Time Exposure it does have its moments but they are fewer and farther between than on Time Exposure