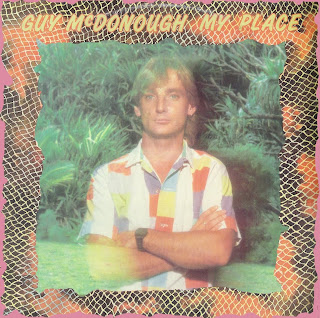 Guy McDonough's contributions to Australian Crawl are often sadly overlooked or forgotten about. In addition to playing guitar for Australian Crawl, Guy wrote or co-wrote a handful of songs on the Sirocco album, McDonough also sang lead on Oh No Not You Again and shared lead vocals with James Reyne on Errol (a song about the late Australian film star, Errol Flynn).

It didn't help McDonough that his voice bore a striking similarity to that of Reyne. To the untrained ear of the more casual fan it sounded as if all of Australian Crawl's songs were sung by Reyne.

In June 1984, Australian Crawl was forced to abruptly end their tour when Guy McDonough was admitted to a Melbourne hospital. Unfortunately, Guy would succumb to viral pneumonia on June 26, 1984. He was only 28.

Prior to his death with his brother Bill (former Australian Crawl drummer) on drums, Sean Higgins on keyboards & synthesizers, Nigel Spencer on bass & synthesizers, and Michael Bright on lead guitar Guy had recorded a handful of demos. Following his untimely passing, as a labour of love, Bill completed work on the demos and polished them up for the posthumous release of Guy's debut and only solo album. A handful of other musicians lent their talents to Bill in his completion of My Place most notably including Guy's bandmate, James Reyne on background vocals, Men at Work's Colin Hay also on background vocals, and Mick Hauser and Jo Camilleri (of Jo Jo Zep and the Falcons) on sax.

Other than being overly synthesizer friendly (it was recorded in 1984 after all!) the material on My Place would not have sounded out of place on an Australian Crawl album. For that matter, Guy had re-recorded Things Don't Seem which he had written and had been originally recorded on Australian Crawl's Sirocco album (although the Crawl's version featured James Reyne on vocals). The songs are all relatively catchy and the material is generally strong. Camilleri's sax is a welcome addition to songs like Too Many People and Can't Help Myself. The latter of which sounds like it just as easily could have come from a Jo Jo Zep album.

Given Guy's untimely passing it's unfortunate that his output was limited to this album, 1 EP and 2 LPs by Australian Crawl. My Place shows incredible promise and does keep the listener wanting more. Incidentally, Australian Crawl did attempt to soldier on without Guy to rather abysmal results. The band's final studio album, Between a Rock and a Hard Place (with Simon Hussey and Mark Greig replacing Guy on guitar) was an abysmal failure that didn't even chart. The band had paid $400,000 out of pocket to record the album and toured extensively to pay off the recording fees associated with that album. Once the album had been paid off and the tour was over, Australian Crawl called it quits. This is quite a testament to Guy's contributions to the Crawl prior to his passing.

Related Links
My Place (download the album in here! compressed in .rar format)
My Place (album details from Midoztouch.com)
Guy McDonough (wikipedia)
Australian Crawl (wikipedia)
Posted by Perplexio at 5:57 AM

This is one I'll definitely investigate on the basis of your review.

Really an interesting review, Perplexio... Wants me to read more of Guy McDonough ! I'll be also watching some of his videos on Youtube, let me see if I could find some :)

Sean: It does have kind of a New Wave vibe to it at times, but it's still enjoyable. The last track, Memory is downright haunting in light of McDonough's passing. I think whomever came up with the tracklisting (in particular the order in which the songs appeared) did a brilliant job as I can't think of a more suitable song to close out the album.

bearockr: I've only been able to find 2 music videos that feature McDonough either singing lead or sharing lead vocals, both with his band, Australian Crawl Oh No, Not You Again and Errol-- he shares the lead vocals on the latter with James Reyne.

Many thanks, I have so been looking for this. Had it on cassette which was broken many many years ago.

Wow, thank you so very much for making this album available. I love the Crawl for ages and didn't know so much about how Guy songwriting was important to the band. I guess he is like the Izzy Stradlin of Australian Crawl, the one "quiet guy" that somehow made the music sound magic. Once he was gone, it was over. Thank you SO MUCH!!!!

I was on the Gold Coast in 1985 with my brothers. Walked into a record shop and bought Guy's album. Still got it. The last track stays in your head forever.