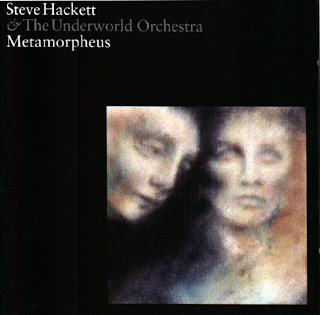 In the seventies Steve Hackett made a name for himself as the guitarist for Genesis during their progressive era.

Within a year or two of Peter Gabriel's departure, Hackett followed. While he hasn't necessarily had the commercial success Peter Gabriel has had since departing Genesis, Hackett has certainly made a name for himself by displaying his versatility on the guitar-- performing all range of genres world music, classical, progressive, and rock.

In 2004 he entered the studio to record the follow-up, Metamorpheus-- Hackett's musical interpretation of Orpheus' passage into the underworld.

For many classical music is heard but rarely listened to. Metamorpheus dares to be listened to. To merely hear this album without taking the time to really listen to and absorb its beauty is doing the listener, not to mention this music, a tremendous disservice. There are so many beautiful and subtle nuances-- this music paints a beautiful portrait on an aural canvas.

Simply put, Hackett has created a lush beautiful classical guitar album for people who wouldn't normally listen to classical guitar. Metamorpheus is an even further demonstration of Hackett's overwhelming versatility on guitar. His work with Genesis merely whets the appetite, Metamorpheus sates it!

This album sounds good! The only thing I have from post Genesis/Hackett stuff is the GTR album with Steve Howe.

Thanks a ton Perplexio, for mentioning this album in your blog, I looked up the song Firth of Fifth on youtube, and simply loved watching it live ! I'm glad to have found such an awesome piece of guitar work. I'm dying to hear other songs from it too :D ! Nice post really :)