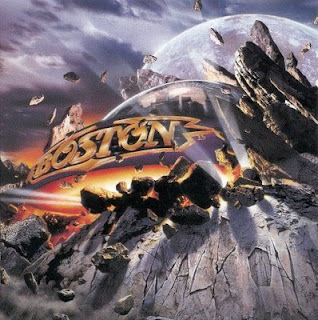 "But there's no Brad Delp!"

It's one of the biggest gripes I've heard about this album, and I heard it repeatedly. If it's any consolation Delp did rejoin the band for the subsequent tour to promote the album.

That being said, Delp or no Delp this is a thoroughly enjoyable album. While Fran Cosmo's voice isn't quite as distinct as Delp's he does have the range Delp had in his prime and he is equal to the task of the material on the album.

And in all fairness to Mr. Cosmo he and Delp both took turns singing lead on former Boston guitarist Barry Goudreau's 1980 solo album.

Given the strength of the material on Walk On, that I'd argue is possibly the best material Boston had recorded since Don't Look Back or possibly even their debut (if I were being particularly generous). Tight soaring vocal harmonies-- Check, trademark tight Tom Scholz "guitarmonies"-- Check, superior musicianship-- Check. I'd argue the timing of Walk On and the long delay (8 years) between albums likely contributed far more to its relative lack of success (compared to Boston's other albums. When you couple in that this album was released in the era of grunge, this album was far too polished to compete with the much rawer production that was coming from the likes of Nirvana, Stone Temple Pilots, and Pearl Jam around that time.

The album starts with a bang on I Need Your Love and keeps up the pace on Surrender to Me before the 12+ minute Walk On medley begins. Perhaps my lone complaint about this album was that Walk On was broken up into 4 tracks on the CD. None of the 4 tracks can stand on their own given the flow of the medley, I'd rather Scholz had made Walk On a single 12+ minute track. He still could have listed the different parts on the CD sleeve or in the liner notes. On some CD players the transition from track to track is rather seamless, but on others there can be a slight "hiccup" between each track that is somewhat jarring in an otherwise thoroughly enjoyable piece.

Magdalene, is a re-working of a song by Hybrid Ice, a band that found regional success in the early eighties in their native Pennsylvania. Having heard both Hybrid Ice's original version and Boston's version I've got to say that Scholz took a good song and made it great. The Hybrid Ice version is enjoyable enough, Scholz kept the choruses but changed the verses substantially and the harmony vocals by David Sikes and Tommy Funderburk are so tight they give me chills. To this day Magdalene remains my favorite song on this album. It just sounds as if everything fell into place. I'd even go so far as to say Magdalene blows their hit Amanda out of the water.

The album closes with the upbeat We Can Make It. It's an upbeat song about working together to change the world, it's the hints of a message that has crept increasingly more into Tom Scholz's lyrics in the years since.

If you've generally ignored this album due to the absence of Brad Delp, you're doing yourself a tremendous disservice. This album is superior, in every way, to 1986's Third Stage and is easily one of Boston's strongest albums-- Delp or no Delp.

Posted by Perplexio at 4:46 AM

I admit that I bought this album when it came out in '94, listened it a couple of times and shelved it. Lot of it had to do with, yes, no Bradley Delp. After reading your review, I decided to listen to it from your angle.

Your are right about Tom Scholz's guitar work. Very orchestrated and complex. I like it! Makes me wonder how he would pull it off in concert. (Somehow he did when I saw them in '86)Thanks for your review!

Drew: Interestingly my familiarity with Boston when I purchased this was very limited, I'd heard More Than a Feeling on the radio a few times but that was about it. This was the first Boston album I purchased so I didn't have a bias against the album for not having Delp on it. That likely had a lot to do with my enjoyment of the album vs. those who were more familiar with the band and by extension Delp's vocals.

I never had any need to buy the first Boston disc because every song from it is playing on a classic rock station somewhere at some point in the run of a 24 hour day.

"Don't Look Back" is underrated.

As for this one, I have not heard a note from it, so I'll have to check it out based on your recommendation.

I can't say that I've ever been either pro- or anti-Boston. It's more of a mood thing - sometimes I'll hear something by them and it just works for me.

As for Walk On, I remember hearing it when it initially was released and thinking that it wasn't a bad record, but, as you note, with the ascendence of grunge, it was an ill-timed release.

Good review, but I'd like to disagree with your assessment of What's Your Name. Perhaps the somewhat cheesy lyrics may have something to do your opinion of it, but this song just blisters the paint off the walls. Even the bridges in the ballads feature searing guitar work. I own every Boston album but only play the first four, and I agree that Walk On is superior to Third Stage (like Third Stage on steroids perhaps). Imagine how good it could have been with real drums and a young Delp on vocals. And the louder this album is played, the more guitars seem to come out of the back ground. I would say that this is the only rock album ever (that I'm aware of) that mimics the power of a symphony orchestra.

I wish I could agree with this review. I love Boston's first three albums, even Third Stage. And I've wanted to love the three albums since. I really did.

But Walk On is the album that, in my opinion, Tom Scholtz's guitar work all started sounding very derivative and the preachiness in the lyrics came to the forefront like an annoying great aunt who isn't happy about you and your girlfriend living together. When I bought this album I was incredibly excited, but by the time I was finished with it I found myself incredibly tired of being told what the meaning of life is and how we all need to bond together to fix the world. Call me cynical, but I look for my spiritual guidance from a higher source than Tom Scholtz.

Another thing that really bugged me back in 1994 that a song a cheesy as I Need Your Love was not only the first single, but the first track on the album. That song is by far the weakest "hit" Boston ever had. The utltra high pitched chorus vocals and bad highschool poetry-esque lyrics totally ruin the awesome initial minute of guitar greatness.

While I missed Delp's vocals, Cosmo's sound so close overall that I felt like Delp's absence was only a minor thing.

The one saving grace on the album is the Walk On Medley which pieces together a really kick ass song and the trademark Boston guitar interlude (i.e. The Launch, Foreplay, etc). If Boston had issued this one track (or four tracks if you read the liner notes) as a single or EP I would have been kick ass excited for what lies ahead. Instead, it's a really strong portion of an overall very weak album.

Considering how Corporate American and Life, Love, and Hope take whatever Boston had at the beginning and whittles it down to it's lowest common denominator, I guess Walk On could be considered a masterpiece by comparison. However, when you compare it to the greatness of the first two albums and the above average-ness of Third Stage it becomes really obvious that Walk On is 40 minutes worth of going through the motions and retreading every preachy cliche known to man. What a disappointment.