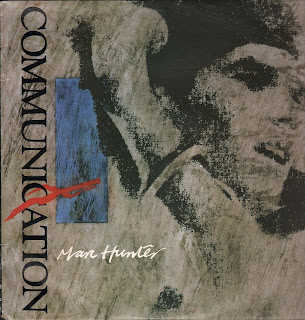 There’s an inexplicable comfortableness and familiarity with Marc Hunter’s Communication. It’s the long lost friend you’ve met for the first time. Even though you’ve never seen each other before there’s an instant ease as if you’d known one another your whole lives.
From start to finish Communication is that friend. It’s that album I listened to incessantly when it came out in 1985… except it was never released in the United States and now it’s 2010 and it just leaves me feeling like this is the album I would have been listening to incessantly in 1985 had I been aware of its existence at the time.
There’s not a bad track on the album, Hunter’s voice is as I’ve discovered continually enjoyable whether it’s within the context of his solo material or singing lead with Dragon.
Speaking of Dragon Communication is also the more laidback mellow younger brother to Dragon’s 1984 album, Body and the Beat.
Admittedly the programmed drums keep this album firmly planted in the decade in which they were recorded but the songs are well crafted and the material is strong in spite of the dated sound that the programmed drums give the material.
Urban Tribal has a haunting quality to it and is one of Hunter’s better vocal performances either as a soloist or with Dragon. The Empty Beach is a snapshot of a day alone at Bondi Beach. Lyrically it’s to Australia what Jimmy Buffet’s songs are to the Caribbean. Simple Words feels like a single although, the title track remained the only single released from this album (and it did enjoy moderate success in Australia).
The laidback relaxed but at times melancholic vibe permeates the album from start to finish. But there’s honesty in the music that gives it the aforementioned familiar feeling. Even if you aren’t personally in touch with what Hunter is singing about, you know the type of people of which he sings. They are the characters in the movie of our lives so sit back relax and get to know these ten new friends.
Related Links
Marc Hunter Communication (YouTube video)
Marc Hunter (wikipedia)
Posted by Perplexio at 7:34 PM