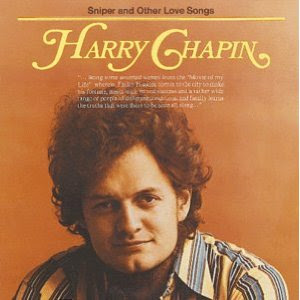 While not as commercially successful as his debut, Sniper and Other Love Songs is a far superior album to Heads & Tails. Harry’s vocal delivery and range are substantially improved, the production is superior, and the overall quality of the material is far more even and consistently good. Where Heads & Tails was largely buoyed by Taxi & Dogtown, there’s not a weak track on Sniper and Other Love Songs.

The first half of the album, or what would have been side 1 of the LP is anchored by Sniper which is easily one of Chapin’s most vocally challenging songs. Later in his career Harry would rarely sing the song as he confessed, “It tears my voice to hell.” While no real names are actually used. The song is a fictitious account of actual sniper Charles Whitman who killed 14 people and wounded 32 others from the clock tower at the University of Texas in 1966. The song is so ambitious in its scope it plays out like a screenplay examining the psychology and mindset of the sniper. Harry alternates between singing the voice of the sniper, the eyewitnesses and an objective narrator showing a tremendous range and an impeccable ability to shift between different vocal deliveries within the same song.
The other standout track on the first half of the album is Burning Herself. After the soft more acoustic folk stylings of And the Baby Never Cries, Burning Herself is a somewhat jarring piece. Compared to the other songs on the album it’s largely out of place, but it’s that rather jarring out of place style that makes the song that much more effective. There’s an anger and hostility to the lyrics that needs to be noticed.

The second half of the album is equally strong, if not stronger. It features the hauntingly beautiful A Better Place to Be about a night watchman and a rotund waitress who “both know all about loneliness and living all alone.” It also features the catchy sing-a-long, live-staple Circle.

All in all, Harry sounds decidedly more comfortable and self-assured in his second outing. The quality of the material is consistently better and you can clearly hear Chapin’s growth as both a singer and songwriter. *** ½ (out of *****)

A Better Place To Be