Island of the Sequined Love Nun by Christopher Moore 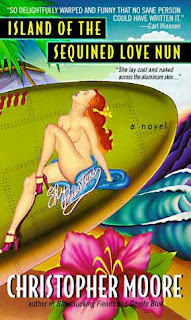 Christopher Moore is nothing if not irreverent. Having long since read all of Moore's books I've started re-reading some of his earlier works that I discovered all those years ago.

In WWII a bomber, The Sky Priestess, lands on a remote Pacific atoll in Micronesia, Alualu. The people of the island have come to be known as The Shark People, as Alualu is the only place in the world where the sharks are more afraid of the people than the people are of the sharks. The pilot of the Sky Priestess, Vincent, is viewed as a God as he delivers cargo and glimpses of western civilization to the islanders. He also proves much more successful at establishing religion on the island than the Catholic missionary that was recently killed by the Japanese. After all, it's much more impressive having a God that you've actually met in person. Vincent promises to return with more cargo for the Shark People but The Sky Priestess gets shot down by the Japanese before Vincent is able to make good on his promise. And thus a cargo cult is born.

Fast forward a few years and an idealistic Christian missionary doctor, Sebastian tries to succeed where the Catholic priest failed. Unfortunately, for Sebastian, the Cargo Cult has taken hold. The Shark People show crucifixes as 2 propellers crossing each other, they portray any images of Jesus that they see wearing a WWII bomber jacket. They worship Vincent and many even name their children after him.

Sebastian meets Beth an "exotic dancer"/nurse on a trip to San Francisco for a medical seminar.  Beth bears an uncanny resemblance to the woman painted on the fuselage of The Sky Priestess in a photo they both discover at the San Francisco library and a brilliant idea is hatched. Having little luck converting the Shark People to Christianity, Sebastian decides if you can't beat 'em, join 'em and Beth becomes "The Sky Priestess" in a rather unscrupulous medical scheme funded by Japanese businessmen that are keeping Sebastian's mission work on Alualu afloat.

Tucker Case is a bit of a loser, a pilot for a cosmetics magnate that uses his charms to lure middle-aged cosmetics distributors to bed. After an ill-fated in-air dalliance Tucker finds himself seriously maimed and out of a job. Tucker receives a job offer from Sebastian to fly his Lear jet on medical supply runs between Alualu and Japan. Given Tucker's recently revoked pilot license and at that point limited prospects he's encouraged to take the job by his friend, Jake Skye, and a mysterious WWII bomber pilot that keeps mysteriously appearing to him.

On its surface, Island of the Sequined Love Nun is a fun and somewhat whimsical read. Under the surface it's an interesting take on origins of organized religion that the reader may or may not agree with but should at least take the time to ponder. Having read all of Moore's novels before and since reading this one, Island of the Sequined Love Nun has remained a favorite of mine. I'd argue this also makes an interesting companion piece to Moore's much more popular and successful Lamb: The Gospel According to Christ's Childhood Pal, Biff. And Tucker Case was a popular enough character that he made another appearance in Moore's zombie Christmas novel, The Stupidest Angel. All in all, if you're new to Christopher Moore all of his books are thoroughly enjoyable, Island of the Sequined Love Nun is as good a place as any to start your literary journey into Moore's rather quirky imagination.

I'm not familiar with Christopher Moore, but I don't get in anywhere near as much reading as I once did (but, now I have someone to check out). He sounds like he might be in the same vein as Tom Robbins.

As far as absurdity goes yes. But he's doesn't get quite as flowery with his prose as Robbins does. In that regard he's closer to Dave Barry.