Between a Heart and a Rock Place by Pat Benatar 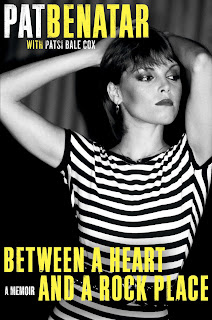 Katy Perry, Lady Gaga, the Donnas, Fergie... the list goes on and on.  But their careers likely would have been considerably rockier and likely even a bit less successful had women like Pat Benatar not paved the way for them.


Most of us know her hits Heartbreaker, Hit Me With Your Best Shot, Love is a Battlefield, Invincible, and We Belong to name but a few.  But there's so much more to her story than her hits and the path not only to her success but once she attained it was far more difficult than most realize.


Even if you're not a big fan of Ms. Benatar's music, and admittedly prior to being approached for this review my familiarity with her work was largely limited to her hits, Between a Heart and a Rock Place is a thoroughly enjoyable read.


Pat gives a very candid snapshot of the music industry of the late seventies and throughout the eighties-- its superficiality, its obsession with image, and the many double standards applied to female musicians that weren't necessarily applied to male musicians-- at least not to the same extent.


The stories that are told of record label executives and the peek behind the curtain to see the Wizard that Ms. Benatar provides throughout her book shows the considerably less glamorous and far less savory side of the music industry;  How they tried to tell her how to look, how to dress, discouraged her relationship with her guitarist and later husband Neil "Spyder" Giraldo, and even attempted to hide her pregnancy for her first daughter and make her feel ashamed of it; all of it would make for quite an incredible novel but what makes it even more chilling-- it's all true!


Without giving too much away-- this book is a must read for any fan of music, anyone curious about how the recording industry works, and certainly for any aspiring musicians whether or not you happen to be fans of Pat Benatar as a musician.  The insights provided give a glimpse of how much popular music has evolved from the late seventies to the present and it's all through the eyes of one of the most successful female rockers in the history of rock and roll!

I always thought Pat got a bad rap. You're right about the music industry back then. I had a girlfriend who I produced. I made her better and better tapes. When she got a record deal, her lawyer said "Record companies hate it when the singer comes in with her boyfriend producing her." So she dumped me, got a non-musician to produce her record and it sank like a stone.

Pat certainly was inescapable in the '80s and, though she didn't reinvent fire, most of it sounded great on the radio.

I was supposed to interview her when Go came out. I was stoked, but it fell through.

luminous muse: Honestly before reading her memoir I was only peripherally familiar with her music. After reading her book I've gone back and started picking up some of her stuff. I started with her debut. I had it playing on the stereo the other night and my wife asked, "Who IS this?" I told her who and she quite liked it so I told her she could keep the CD, I'll just rip it to mp3 for my car later.

Barely Awake in Frog Pajamas: I'm certainly giving her music more of my attention after reading her memoir. It's given me a new respect for her and rekindled an interest in her music that has only ever been peripherally appreciated by me before this.

This looks right up my street. She was a 'must buy' artist for me in the 1980s and I have a stack of vinyl to prove it!

Somehow over the years we got a bit disconnected and I rarely listen to her now - but this has renewed my interest.

Pat Benatar could rock! Her songs were great, the instant I saw your post her songs started playing in my head, and now I'm having a heck of a time getting them out of there!