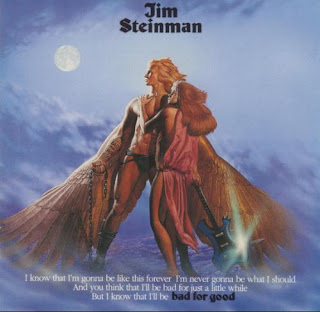 In the midst of a rigorous and exhausting tour schedule in the late seventies Meat Loaf literally lost his singing voice...  for several years.  Meanwhile his collaborator/songwriter, Jim Steinman, was getting anxious and chomping at the bit to record a follow-up to the wildly successful Bat Out of Hell album.

For the most part, Steinman opted to do the vocals himself.  On Rock & Roll Dreams Come Through he enlisted the assistance of studio vocalist Rory Dodd (best unknown for being the voice Michael J. Fox lip-synced to on Johnny B. Goode in Back to the Future).  Steinman wasn't and isn't a great vocalist he is passable but his voice lacks the range of Meat Loaf so on some notes that Meat Loaf would have hit with ease, Steinman struggles with.  On Left in the Dark this actually works to Steinman's advantage.  His struggles to hit the notes come across as emotional pain and it fits the part of the cuckolded husband being portrayed in the song perfectly.  In contrast, Meat Loaf hits the notes with relative ease but his vocal delivery lacks the depth of pain that Steinman's delivery has.

Considering there are only 3 songs on here that (at least to my knowledge) that are yet to appear on albums by Meat Loaf  (Stark Raving Love and Dance In My Pants and the instrumental The Storm) one can get at least a glimpse of how this album may have sounded had it been released as Steinman originally intended-- as a Meat Loaf album.  Having heard the Meat Loaf arrangements of many of the songs on here though, I'd have to counter that as much as I might prefer Meat Loaf's vocals on songs like Rock and Roll Dreams Come Through and Out of the Frying Pan (And Into the Fire) I'm not necessarily as keen on his arrangements on Bad For Good (although I do dig the Brian May guest guitar bit on Meat's version) or his vocals on Left in the Dark.

All in all though it is an enjoyable album.  It IS trademark Jim Steinman and even if one finds his vocals lacking at times, the strength of the material tends to outweigh his vocal shortcomings (especially, as already mentioned on Left In the Dark, where his vocal limitations actually give the song more emotional credibility).  Some may shy away from the over the top anthemic bombast of Steinman's work.  But there's something to be said for over the top musical theatrics--"If you don't go over the top, you'll never see what's on the other side." (said by Steinman himself)

Great review. A good friend in high school was batty (pun intended) over Meatloaf. This brings his music and collaborations in perspective.

Most of his songs all have that over the top bombast. I consider him as the songwriter for the soundtrack to adolescence. When we're teens and our horomones are all out of whack we tend to blow things out of proportion. Steinman's music really speaks to that and captures that whole over the top/blown out of proportion nature of being a teen. And even though I'm an adult now, his music still strikes a chord with me as it reminds me of what it was like to be a teen.

I loved "Rock And Roll Dreams Come Through" (and still do), but, of the other songs I've heard, I felt let down (and I keep seeing Kris Kristofferson in the video for Barbra Streisand's version of "Left In The Dark").

I dig Steinman as a writer and producer. It's over the top, but I like how everything goes to eleven (or maybe twelve).

I remember that, back in the day, he was going to work with Def Leppard to follow up Pyromania. I don't know if they ever actually did anything, but, if they did, I'd love to hear those sessions.

I had never heard of this disc until now. Quite familiar with Steinman's work (as interpreted by other artists) and respect his talent, though I haven't heard him sing. Interesting stuff.

I love this bombastic music! Rock opera! And, you're right, Steinman deserves more credit for his incredible work.