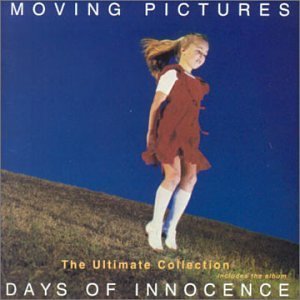 In the early eighties there was a spike in interest in all things from Down Under. Little River Band who had risen to popularity in the late seventies saw their popularity grow. Groups like Split Enz, Men At Work, INXS, the Hoodoo Gurus, Crowded House, Icehouse, and Moving Pictures also made their indelible stamps beyond their own watery borders. While some of these groups are still remembered fondly, some are still even active, many of them have also faded into obscurity. Moving Pictures fall into the latter category.

Initially their success was limited to their own native shores. They saw moderate success on Australia's Countdown with their song, Bustin' Loose and then it all blew wide open when they released What About Me? It quickly became a worldwide hit, buoyed by its rotation on the then rather new and fledgeling MTV (remember when they still featured music videos?)

Their debut album, Days of Innocence which features both the minor "local" hits, Walls and Bustin' Loose as well as the worldwide smash, What About Me? is a delight with its sax-laden power-pop, catchy hooks, forays into New Wave, and the vocals of Alex Smith. In 2003, with Moving Pictures back catalog out of print. This collection featuring Days of Innocence in its entirety along with a handful of non-album singles and the stronger material from their follow-up album, Matinee, which remains out of print to this day was released to sate the public interest in this band.

Given the extra material on the album, one can easily determine why Matinee remains out of print. While the material is enjoyable it hasn't aged well and is not as strong as the first 10 tracks that make up the original Days of Innocence album. That being said, this import is a thoroughly enjoyable snapshot of the best this band had to offer before they split up, went their seperate ways and the band became but a footnote, the subjects in a grainy music video, and an ocassional earworm that would surface on eighties themed radio shows in the United States and Australia.

With the album's dated sound, listening to it is a time machine of sorts. If you close your eyes when listening to it you can not only hear the eighties but feel them seeping into your pores and taking you back to the era in which the music was recorded.

Related Media and Links
What About Me music video

Musically, I missed the 80s. Good time to play catch-up.

What About Me? got essentially no airplay where I was living. I doubt that I heard it more than a dozen times and I was spending hours each day listening to the radio at the time.

But when I did hear it, it really popped and stood out from a lot of the hits that winter.

I know that I heard a couple of other tracks through the years, but nothing very memorable.

Plex! -- Just a quick note 2 say Thanx 4 "Following" me a few days back. Yr intrest helped push me 2 actually POST SOMETHING NEW 4 a change. Thanx 4 yr support, & keep crankin out the reviews!
PS: Did U ever track down a copy of Lewis Shiner's GLIMPSES? I figured after yr review of Nick Hornby's JULIET NAKED that you'd really Njoy Shiner's novel.... -- TAD.