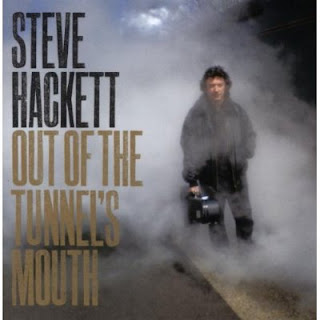 Every once in awhile a song, an album, or even just a simple solo-- be it vocal, guitar, keyboard, or some other instrument will send chills up and down my spine.  Admittedly that hasn't happened in a long time.  There have been albums I've enjoyed.  And while I've dared music and musicians to wow me it's been quite awhile since I've been gobsmacked by an album.  Steve Hackett gave me a much needed and long overdue musical sucker punch with his latest release.

While not as well established or known as his former bandmates, Steve Hackett has developed a respectable and devoted cult following since his departure from Genesis following their Wind & Wuthering album in 1977.

In the years since his departure from Genesis, Hackett has explored several different musical styles-- classical, flamenco, world music, jazz, and even the prog rock that he'd come to be known for in his five years with Genesis.

Of all of the albums that he has recorded since his debut, Voyage of the Acolyte, none of them has married all of the music styles that he drew upon for influence as well as Out of the Tunnel's Mouth.  The Genesis influences are unmistakable and it leaves one wondering if this album is what Genesis might sound like today had Hackett been the driving creative force in the band instead of Banks, Rutherford, and Collins.  Incidentally, the album also features Hackett's predecessor, Anthony Phillips, playing 12 string guitar.

The album starts with the hauntingly beautiful, Fire On the Moon, there's a dark haunting quality in the opening of the song thanks to the music box that complements Hackett's guitar and vocals throughout the song.  At about 1:10 the song shifts from haunting to transcendent and majestic before shifting back to haunting at 1:37.  The song shifts back and forth between haunting and majestic throughout.  Hackett's vocals are reminiscent of Pink Floyd's, Roger Waters and David Gilmour.  The guitar solo that comes in at 2:46 is one of the most emotive solos Hackett has recorded since Firth of Fifth on Genesis Selling England By the Pound.  Hackett graces the song with a second guitar solo starting at 4:36 that picks up where the first had left off at 3:25.  There is a beautiful keyboard piece that dances around Hackett's guitar solos.  It never over-powers the guitar it merely accents the better elements of Hackett's fretwork.

Nomads starts with a brilliant flamenco flavored acoustic guitar solo that further showcases Hackett's versatility.  As with Fire On the Moon the vocals on Nomads are more used like an instrument than for lyrical effect.  Heck the phone book could be sung to the same melody and make the song just as satisfying.  That being said the lyrics are well written and certainly leave some of Hackett's fans wondering why Banks, Rutherford, and Collins didn't utilize Hackett's talents more when they had the opportunity to do so.  The flamenco guitar resumes at 2:45 into the song before Hackett switches from the acoustic flamenco to his trademark electric guitar at 3:07 for another brilliant solo that is nearly as enjoyable as the solos in Fire On the Moon.

The style and mood of the album shifts from the light and airy flamenco tinged Nomads to the pastoral prog-rock vibe of Emerald and Ash, a song that would not have sounded out of place on a Caravan album back in the seventies.  The song is chocked full of imagery.  The song is also colored with some beautiful sax playing by Rob Townsend.  This song also features not only Hackett on electric guitar but Anthony Phillips on 12-string acoustic guitar.  The two former Genesis guitarists sound absolutely brilliant together.

Tubehead is a more straight ahead instrumental rocker with Yes's Chris Squire guesting on some frenetic bass playing.  Where the previous material was lighter and more relaxed. Tubehead has a dark crunchy edge and plays like a train running full speed ahead.

The mood shifts to somber and melancholy on Sleepers.  Much like with Fire On The Moon, Nomads, and Emerald and Ash there's a haunting beauty to Sleepers making for yet another brilliant track on an album that had already been consistently brilliant.  The mood on the song shifts from melancholic to dark and sinister at 4:53.  If ever there was a song that screamed of Halloween, Sleepers is it.  Hackett's guitar playing evokes spooky haunted houses on chilly fall evenings.

Ghost In the Glass has a light jazz fusion vibe to it.  The percussion suggests a dimly lit jazz club after closing.  The acoustic guitar work of Anthony Phillips gives way to the haunting electric work of Hackett whose electric playing is augmented by a string section of violins and violas.  Much like the keyboard work on Fire On the Moon the additional strings accent Hackett's guitar playing.

Still Waters is deceiving in its title as it has a rolling blues vibe to it adding yet another musical style this already musically diverse album.

The album closes with Last Train to Istanbul which has more than subtle hints of Middle Eastern influence.  You can hear the train chugging along at a moderate but steady pace through the Turkish countryside.  There is a lot going on in the song and it's easily the "busiest" song on the album.  With so many different styles coming into play and so many different influences you can listen to the song multiple times and hear something new and different each time.

What makes Out of the Tunnel's Mouth so enjoyable from start to finish is its accessibility.  Not all of Hackett's explorations into other musical styles have come together as well as this album.  Despite featuring so many different musical styles there is a cohesiveness to the album.  All of the songs sound like they belong on the same album.  And all of the songs, despite the myriad of different styles, are distinctly Steve Hackett.  I'm willing to go out on a limb here and say this is the best solo album of any member of Genesis past or present and better than any of the albums Genesis has recorded since Hackett's departure  (Five out of Five Stars... or if you prefer a PERFECT TEN on a scale of 1 to 10!)

Posted by Perplexio at 9:00 PM

Must get my hands on this one. The review sealed the deal.

Always loved Steve Hackett. Genesis finished for me when he left. I own all his solo stuff up to 'Genesis Revisted' in the mid 90s but since then haven't really listened to anything he's done - so I might just give this s try. Great review!