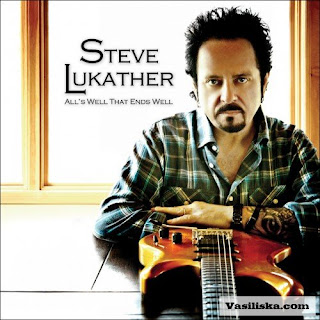 In his latest outing Steve Lukather shows he's still at the top of his game.  While his last album, Ever Changing Times, was thoroughly enjoyable;  All's Well That Ends Well, shows that Lukather is at his best when he's at his most personal.  Much like with his 1997 album, Luke, Lukather gets a bit more personal than on his other solo releases.

The album opens with Darkness In My World.  The opening is somewhat ambient in nature until almost two minutes into the song when Lukather shifts gears with an infectious rhythm groove.  This is one of the more melodic examples of AOR I've heard in awhile.  Despite the advent of iTunes and single-serving music, Lukather proves album oriented music still has its place.

On My Way Home sounds like it wouldn't have been out of place on Ever Changing Times.  The style is reminiscent of that album.  Lukather has said that this album is a continuation of that album and On My Way Home is certainly a track that bridges the styles of the two different albums together. The vocals are tight and the song has those trademark jazz fusion influences that Lukather is known for.  The guitar solo hints to one of Lukather's influences and close friends, Larry Carlton.

Can't Look Back is Lukather's look back at looking forward in his life.  The song captures Lukather's nature of restlessness.  He's been a perpetually active musician since before Toto's inception in 1977 between touring, recording, and doing sessions at a pace that would drive many of us to exhaustion.  The song features a soulful guitar solo, the kind Lukather has come to be known for.

Don't Say It's Over is one of Lukather's trademark ballads lyrically reminiscent of Toto's I'll Be Over You but musically it completely fits into the musical jigsaw of this album.

Flash In the Pan is a hard driving rocker displaying Lukather's trademark lack of restraint.  The song is balls to the wall from start to finish.  One of the more amusing and fun songs on the album.

Watching the World displays Luke's growing disenfranchisement with the political establishment and the general state of the world.  "Sitting here watchin' the world, fallin' apart, oh, what can you do?, Standing in the shadows of lies and deceivers, When does it end?"

You'll Remember can best be described as a fusion rocker.  It would not have sounded out of place on Ever Changing Times and is one of the "common threads" that ties this album to its predecessor.  The guitars and vocals are definitely pop rock, but the keyboards and rhythm speak more to Luke's fusion influences.

Brodie's has a bad-ass blues vibe it's the pissed off bitter counterpoint to the more melancholy Watching the World.  The lyrics are fortunately (or unfortunately, depending on how you look at it) have a fair share of pop-cultural references to big-screen TVs and Facebook pages.  It makes the song prescient for our times but over time will likely "date" the song to this era.

The album closes with the instrumental fusion rocker, Tumescent (You've got to love Luke's highbrow sophomoric sense of humor-- great song title for an instrumental piece!).

From start to finish the album is one of Lukather's best. Mixing the polish of 2008's Ever Changing Times with the dark personal vibe of 1997's Luke for an album that works on many levels.

He is a very fine player. Interesting video -though he's gone much farther, like me his career started with the Beatles. Maybe everybody's did.