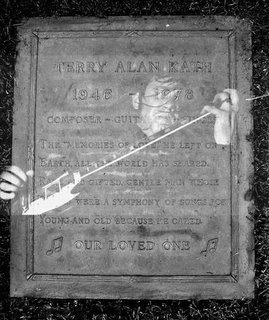 Your joy is your sorrow unmasked
And the selfsame well from which your laughter rises was oftentimes filled with your tears.- from The Prophet by Kahlil Gibran

Terry Kath was born in Chicago on January 31, 1946 to Raymond and Evelyn Kath. While Terry started out on drums, in 1956 he switched to “guitar” using his mother’s banjo to teach himself how to play. As a young boy he would play along to records by The Ventures. Inspired by The Ventures, Terry decided to put together an instrumental group of his own, called The Mystics, to perform instrumental music in that same vein.

After graduating high school, Terry went to DePaul University where he met a young Walt Parazaider and Danny Seraphine forming a band called the Missing Links. The Missing Links were the pre-cursor to what became The Big Thing and later Chicago.

Known for his blistering guitar solos and his remarkable ability to play rhythm and lead guitar simultaneously, Terry was held in very high esteem by many of his peers including the great, Jimi Hendrix. While the horns may have been the heart of Chicago… Terry was the soul. Songs like Oh Thank You Great Spirit, Mississippi Delta City Blues, Takin’ It On Uptown, Scrapbook, 25 or 6 to 4, and Poem 58 all demonstrate Terry’s soulful proficiency and precise rapid-fire playing style and demonstrate his ability to play guitar melodically as if it were the 4th vocalist in the band.

Providing not only blistering guitar solos and working with Peter Cetera and Danny Seraphine as the rhythmic backbone of the band but also giving Chicago some of their most bluesy soulful vocals. Terry was a free-spirit living a life on the edge with a sense of urgency that the rest of the band fed off of. Listening to hits like Make Me Smile, Colour My World, and Wishing You Were Here gives an encapsulated portrait of what a soulful vocalist Terry was.

In 1977 Chicago finished up Chicago XI. The album opens with Mississippi Delta City Blues, a song that Terry had written back when Chicago was still called “The Big Thing” and doing the club circuit in the Chicago metro area. The song opens with a troubled laugh from Terry and then the lyrics that showed his discontent… “I’ve got a smile that I put on, when I’m not at home, when I’m not alone, but it’s so hard, to fake that smile, when my insides are cryin’ and my heart’s torn in half.”

On January 23, 1978 Terry’s laughter died in sorrow. At roadie Don Johnson’s house Terry pointed a gun at his head, he showed Johnson that the clip was empty, not realizing there was a bullet in the chamber, restored the clip to the gun and pulled the trigger. Just one week shy of his 32nd birthday Terry’s life ended abruptly, leaving behind his wife Camelia, his 2 year-old daughter, Michele, and a legacy as a soulful, free-spirited musician.

*The accompanying photograph was something I photoshopped back in 2002.
Posted by Perplexio at 1:38 PM

This is an excellent tribute to a man who never got what was due him. His legacy never transcended Chicago because of the kind of band they were and because he died so young. Although Chicago was already on an artistic downward spiral when he passed away (despite a few more bright momemnts) his death very much sealed their fate. He may not have been Chicago's best singer or composer but his personality and guitar chops brought the band something really special.

Beautiful tribute, perplexio. One of the things I like about this blog is that you remind me of "the greatness that was" of bands like Chicago, when I have a tendency to dismiss them for the commercialism that they evolved into.

Thanks for the props!

I actually have done a couple of other photographic tributes to "fallen" musical idols. I just have to write up the tributes to go with the photos-- but keep your eyes peeled for tributes to the late Eddie Cochran and the late Jeff Porcaro.

I am going to link to this on my site where I have Terry listed - THANKS TO YOU!

(I finally got all your additions on my list)

Drop by and tell me an album cover that brings back memories.

Nice post. I had heard several stories about his death -- this one being the most common -- but often including an element of he knew one bullet was in the gun and he played a little "Russian Roulette." I like your version better.

A true loss. Some say Chicago was never the same -- I certainly agree.

I believe the best account of Terry's death was in the booklet that accompanied Chicago's original box set, the Group Portrait released back in 1991. They went so far as to say that "only Terry knew what he was thinking at that very moment."

Drummer Danny Seraphine's account is more to the effect that Terry was so messed up on drugs & alcohol at the time that he truly didn't realize what he was doing.

Another theory is that he knew exactly what he was doing and he intentionally made it look like he didn't so his wife & daughter would still collect on the life insurance.

But like the Group Portrait said, only Terry truly knew what he was thinking when he pulled that trigger. So no one truly knows.

Check my blog at missrijm.blogspot.com I have a great picture of Terry Kath during one of the Chicago concerts in Paris/France in the mid-seventies.

CDGW-Cubby said...
This comment has been removed by a blog administrator.
12:26 AM

check about Terry Kath at my blog. I miss him too.

What can I say about Terry?
He's one of the greatest guitarist ever and, of course, he doesn't have the same recognition that other players, less skilled, have.
Who's responsible of that?
In many interviews Chicago have always said that music magazines (expecially Rolling Stone)never spoke positive of all of their albums, so this is one of the reasons why Terry never got the recognition he deserves....
This is certainly true, but how Terry could show his mastery with such commercial music? We know how great he was and what terrific was his technique in tracks like Liberation, Poem 58 and more. But what he could show in ballads like "Searchin' So Long", "Call on Me", "Saturday in the Park" & co.
The problem was Chicago themself. Now Terry is well known only at the people really interested in music and not at the common people who usually claim Santana and Jimmy Page as Guitar Gods.......They should do hear Terry once in the life....

Great article/tribute! One honor Terry deserves (and he deserves many!) but hasn't gotten yet is being considered a "distinguished" alumni of Taft High School. He graduated in 1964. I was cited 2 reasons why presently he can NOT be inducted: a) he is no longer living and b) his lifestyle and manner of death are not positive role models.

A petition to encourage the school to change its criteria and to push for Terry's induction, has been going on for about 3 months now and is gaining support. It has already had an impact as the alumni board has agreed to form a committee to research changes needed. This will be voted on at their next meeting in early January. Show your support by signing:
http://www.gopetition.com/petitions/taft-high-school-alumni-honors.html

There is also talk of a Terry Kath Music Library at the school!

Help us "make it happen!"

Celebrate the music of Terry Kath at the Terry Kath Tribute II Event that will be on Sept. 15 at the Copernicus Center in Chicago. Performers include Danny Seraphine, The Buckinghams, James Guercio, Kenny Cetera, and more! Proceeds will benefit the Terry Kath Music Scholarship at DePaul; the Taft HS Music Dept (Terry's Alma Mater) and the McAvoy Foundation's "Good Looks for Kids with Cancer."

Tickets are available and range from $29. To purchase tickets and for more information, visit the event website: www.terrykathtributeconcert.com.

Hi Perplexio, I see you had many questions about Terry and the circumstances of his death. I can refer you to a group that I have created with 2 friends that may have the answers your looking for. It's called "Searchin' For Terry Kath," and we are very open to any topic about TK you can think of. No restrictions, no off limit topics.