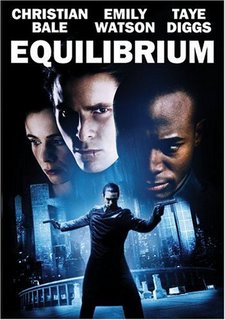 Action movies aren't supposed to be smart. They also generally don't have heart either. The characters are generally flat and/or cardboard and the plot is merely a device to loosely tie well choreographed action sequences together.

In the pills which give equilibrium, the filmmakers have a device which might have allowed their actors to get away with flat and cardboard performances-- essentially they all could have played their parts like Steven Seagall and the lack of emotion would certainly have been believable.

But in casting actors the calibre of Christian Bale, Emily Watson, Taye Diggs, and even Angus McFadyen (best known for his performance as Richard Bruce, the King of Scotland in Braveheart), the film instead benefitted from a higher quality of performances. Instead of just flat and cardboard, Bale's character, John Preston, struggled with his motivation to uphold the law and his curiousity of what he was missing out on by not experiencing emotion.

Mary O'Brien (Emily Watson), is a firecracker, in an otherwise bland clinical future. She plays a renegade whose illicit lover (Preston's former partner, Errol Partridge, played by Sean Bean) had been killed in the line of duty when it was discovered he was keeping "evidence" (books, music, etc.) for himself and allowing himself to feel. Watson's character hasn't been taking her "medication" and her capture forces Officer Preston to confront the life he's chosen to lead and the choices he's made.

Equilibrium is everything action movies are capable of being and should strive towards. There are so many places where the filmmakers could have taken shortcuts or the easy way out. But they didn't. They delivered a high quality and thoroughly enjoyable film in a genre that is generally vapid and dull.
Posted by Perplexio at 5:38 PM