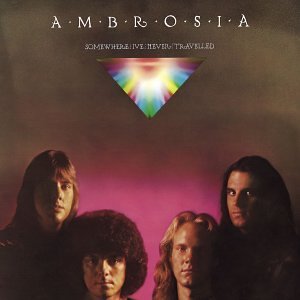 My discovery of this classic was spurred when I got Ambrosia's prom/wedding staple How Much I Feel stuck in my head. Something about David Pack's vocals had made me hungry for more. So I checked out the the All Music Guide and Amazon.com both of which recommended Somewhere I've Never Travelled as one of Ambrosia's best. It seemed as good a place as any to begin my musical journey. Little did I realize the musical treat my ears were in for. If more of the soft rock of the late seventies and early eighties had shown this level of creativity and experimentation it might have better withstood the tests of time.

Considering I'm already a bit a fan of Alan Parsons it truly was quite a mystery as to why I hadn't yet discovered this Parsons produced album. It has the lush orchestral flourishes Parsons own Project material is known for.

The vocal harmonies of David Pack, Burleigh Drummond, Christopher North, and Joe Puerta are tight and reminiscent of the harmonies of Little River Band and Player. And while none of the tracks on this album are as memorable as their classics Holdin' On To Yesterday or How Much I Feel, the album remains consistently interesting.

One of the standout tracks, I Wanna Know features a Chicago-esque horn chart and some ELO inspired string flourishes. Despite sounding rather dated, it shows the band's breadth of creativity. Another of the exceptional tracks is Dance With Me, George which showcases a bewildering breadth of musical styles from classical to pop to jazz.

So if Ambrosia is a group to which your ears have never travelled or if you're own peripherally familiar with their music, this album marks an excellent starting point to journey into their musical catalogue.
Posted by Perplexio at 1:26 PM

I AGREE! This brings me back to long, long ago but it I still love listening to just about anything by Ambrosia today.

I like your blog because I can come on in and browse your past posts and randomly pick one I haven't read yet.

This is still one of my favourite albums of all time. Each song is musically inventive and reminds me of 10cc who although being quite sophisticated still never took themselves too seriously. Same thing gose for Ambrosia. Ahh music from the 70's.

Brilliant album! Christopher North destroys the piano on "Danse With Me George"!