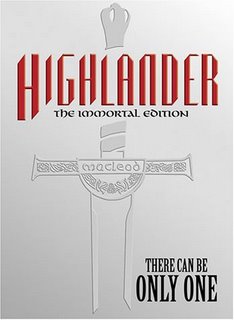 Before the TV series, the Saturday morning cartoon, and before the head-scratching continuity betraying sequels the world was introduced to Connor MacLeod and an immortal race, the brainchild of writer Gregory Widen.

In an era that featured a saturation of action films-- Commando, Cobra, Rambo, Predator, The Terminator-- this film stood head and shoulders above the rest of the pack (with the possible exception of James Cameron's Terminator).

Connor MacLeod (Christopher Lambert) was born in the 16th century and at some point in in his late twenties or early thirties he made the startling discovery that, wow, he's immortal. The only way in which he's able to "shuffle loose his mortal coil" is for his head to come seperated from his neck.

Being immortal wasn't all fun and games. Cast out of his home in Glennfinnan as a heretic in league with Lucifer, watching the love of his life age and die before his eyes even as he remains the same age-- Life hasn't been easy for Connor. Luckily, under the tutelage of Juan Sanchez Villalobos Ramirez (Sean Connery) Connor becomes a much more skilled swordsman than the mere amateur he had been prior to Ramirez much needed intervention.

Fast forward to the 1980s. It is the time of The Gathering when all remaining immortals must face each other in a final combat until there is only one. Standing between Connor and "The Prize" is the evil Kurgan (played with a delightful evil brilliance by Clancy Brown).

Standing in MacLeod and the Kurgan's way are the NYPD and their attractive forensic scientist with a metallurgical hobby, Brenda Wyatt (Roxanne Hart). When Wyatt discovers fragments of MacLeod's sword-- a sword that should not exist she takes a stronger interest in the mysterious antiques dealer Russell Nash (the pseudonym MacLeod has adopted).

Highlander is a brilliant movie that could easily have stood on its own. It It had the strength to stand on its own. Don't waste your time on the unnecessary sequels or the TV series, let the original product speak for itself.
Posted by Perplexio at 4:34 PM

I'm with you -- the original was clearly superior to anything that followed. The mystery of why the immortals were indeed immortal was much better than the amateurish sci-fi explanations that followed.

I am totally with you. Christopher Lambert was the consumate badass as Conner MacCloud of the clan MacCloud. The pretty boy in the series was a cheap imitation.