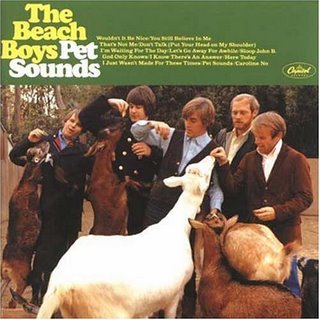 If ever there was a definitive album by any band-- this is it. Pet Sounds is the creative pinnacle of the Beach Boys illustrious career.

With not a weak track on the entire album this album is what a classic pop album should sound like.

On a standard pop album, you'd get about eight catchy or fun songs with a ballad or two tossed in for good measure. Pet Sounds on the other hand is like an art museum for your ears-- each song is an aural painting. Much like in a museum of fine art the more you look at paintings the more you notice things that you might not have noticed at first glance-- with every listen of this classic album, you're more than likely to hear things you hadn't heard on any of your previous listens.

While most casual listeners will know Wouldn't It Be Nice, Sloop John B, and God Only Knows-- those songs are but a mere glimpse at the sheer beautiful splendor of the album as a whole. From the romantic Don't Talk (Put Your Head On My Shoulder) to the oddly upbeat I'm Waiting For the Day with it's melancholy lyrics and upbeat music, to the emotive song of lost innocence, Caroline, No.

This is an album best enjoyed in a single sitting, listening start to finish without interruption as each song only augments the rest of the album. The album which was originally mixed and released in mono has been remastered and rereleased in stereo. The first fourteen tracks contain the original mono mix, at which point the album repeats itself in its remastered full stereo sound. But when all is said and done, whether you listen to this masterpiece in mono or stereo you can't escape its musical brilliance.

YOu really should get paid for your reviews - they are that good!

LOVE THIS ALBUM! It just floats me right back to all those summers in Laguna/Huntington/San Onofre - driving in the Mustang convertible - good times.

I have always loved the Beach Boys and this is Brian's crowning achievement. The harmonies, the melodies and the lyrics are all perfect. "I Just Wasn't Made For these Times" turned out to be prophetic.

One of my all time favourite albums.

Apparently The Beatles heard this and crapped themselves because they thought that Wilson was way ahead of them.

This is one of the best. It should be noted that The Beatles were so impressed with Pet Sounds, that they fired back with Sgt. Pepper.