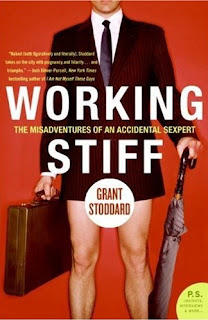 Remember that guy in high school? The wallflower? The one who didn’t get any play… No action, whatsoever? Yeah you know the one, or maybe you were him. All schools have at least one of them. Hell I was one of them and so was writer Grant Stoddard which is probably why his book, Working Stiff resonated with me so well. I’d recommend it to wallflowers every where as it would have given me hope had I had it to read when I was a shy wallflower in high school. If you were a wallflower, or perhaps even if you weren’t, you remember those days when you were less than lucky in love. When everything seemed to be going wrong with that special someone, or with the objects of your affection in general? This book would have come in really handy on those occasions.

That being said, Stoddard’s shift from wallflower to sexpert is more the exception, not the rule. But if he can pull off such an incredible 180 with regards to his relationships with the fairer sex, that should be enough to give wallflowers everywhere at least that glimmer of hope that even if they have a fraction of his success, everything will be okay.

In Working Stiff, Stoddard shares the tale of the strange twist of fate that turned him from a shy wallflower in his native England to a sex columnist for Nerve, a sexually themed online magazine. From taking clothing optional bridge lessons from a guy who thought nothing of leaving his equine-esque cock out for all to see to attending LeatherCamp, to getting a massage with a “happy ending,” or even sploshing with a kinky gay couple, the breadth of Stoddard’s sexual experiences, experiences “he did for science,” are beyond the realm of the sexual imaginations of many of his readers.

That Stoddard experienced these things is amazing in and of itself, that he got paid to not only do these things but to recount his tales for Nerve is even more incredible. He had no aspirations or illusions of ever being a writer. Yet he was given this opportunity that many of the interns at Nerve would have gone to hell and back just to get a byline in the magazine.

What makes Working Stiff such an enjoyable read is its accessibility, Grant takes you with him on his journey of sexual awakening and shares his perceptions and feelings before during and after some of his more outrageous sexploits.

Give Stoddard a chance, you won't be disappointed, Working Stiff is a thoroughly enjoyable read from start to finish and is not to be missed.

I am going to read this one! Thanks D!!!