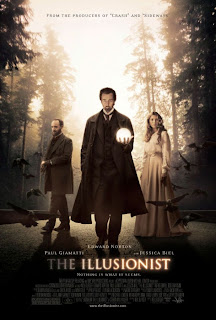 This movie was a delight from start to finish. Edward Norton and Paul Giamatti delivered exceptional performances and the cinematography was reminiscent of classic silent films which gave the film a very classic and at times "sepia" feel, as if the viewer wasn't watching a film on DVD but on a kinetescope.

Jessica Biel isn't a good actress, she never really has been any more than a pretty face. Her performance in this film while adequate does nothing to set her apart from any of her peers. Luckily, her screen time is limited as the film is much more focused on Norton, Giamatti, and Rufus Sewell. Sewell plays Crown Prince, Franz Leopold. His performance is delightfully sleazy. Sewell has seemingly made his career (at least thus far) as playing foils or villains, and right he should as he does so well at playing pure villainy (the exception being in Tristan & Isolde where he played a rather sympathetic and likable Marke).

Saying too much about the plot would likely give away far too much and ruin it for those who are yet to see it. So, to put things as basic as possible, Norton plays the titular "illusionist", Eisenheim, Giamatti plays a police inspector investigating Eisenheim, Biel plays the love interest and as mentioned before Sewell plays Franz Leopold.

But don't take my word for it, give this film a chance, you won't be disappointed.
Posted by Perplexio at 11:32 AM

I still haven't seen this one ... but I want to. Thanks for the prompt.