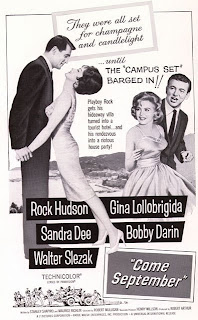 This movie is arguably more notable for what happened off-set during filming than for the film itself.

While the film was focused more on the romance between Robert (Rock Hudson) and Lisa (Gina Lollobrigida) the romance between Sandy (Sandra Dee) and Tony (Bobby Darin) was brewing off-set as well as on. Darin & Dee ended up marrying and having a somewhat tumultuous seven year marriage.

Hudson plays wealthy American, Robert Talbot, who owns a rather expansive estate in Italy where he only lives one month out of every year-- always in September (hence the title). In his absence, his butler-- Maurice Clavell (played brilliantly by Walter Slezak) converts the expansive estate into a hotel.

While on business in Milan one July, Talbot realizes he misses Lisa-- a nice Italian girl he'd courted the previous September. Little does he know, Lisa has gotten sick of waiting for him and is about to marry a British fellow named Spencer (Ronald Howard).

With a single phone call, Lisa decides to call off the marriage with Spencer and give Talbot another chance.

Both Lisa and Robert show up at his estate in July and September forcing Maurice to quickly remove all evidence of the hotel.

Clavell also has to walk a fine tightrope hiding the truth about his true role and the actual ownership of the estate with the hotel guests at the same time trying to hide the existence of the hotel from Robert... While he inevitably fails on both counts-- Slezak provides some excellent comedy throughout the movie that keeps it from slipping into mediocrity.

Meanwhile a group of American teenage girls is staying at the hotel with their chaperone. As she's about to join the girls on their tourbus-- the chaperone slips on a cork and breaks her leg. Fearing a lawsuit, Talbot maintains the ruse of the hotel and steps in to chaperone the girls and to protect them from a trio of American boys whom he knows are up to no good. Despite his best efforts to prevent romance from blossoming young Tony (Bobby Darin), the ringleader of the trio and Sandy start falling for each other.

There is a bit of cat-and-mouse between Tony and Robert in which they perpetually try to foil one another-- Robert trying to protect the virtue of the girls left in his charge, and Tony and his friends trying to get those same girls alone that makes for some amusing comedic moments. It also acts as an amusing foil that perpetually gets in the way of Robert & Lisa's romance.

One of the highlights of the film was Bobby Darin's single vocal performance, a catchy upbeat number, Multiplication, that he wrote specifically for this film.

All in all, it's an enjoyable classic comedy-- certainly dated, but still fun.