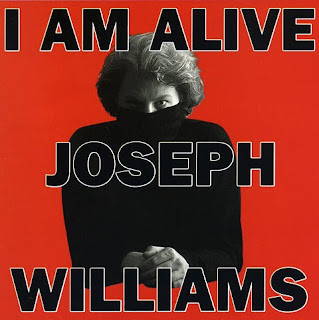 After his rather unceremonious departure from Toto following The Seventh One tour (1987/88), singer Joseph Williams seemingly dropped off the radar.

As a result, his 2nd solo album was aptly titled with the proclamation I Am Alive!

The album opens with Perfectly Clear, a song that seems to scream summer:

From start to finish the song is upbeat fun and catchy. It captures summer so well you can practically smell the barbecues, mosquito repellent, and sun-tan lotion. The optimism of the song is infectious and it puts the listener in an excellent mood. A fantastic way to open the album!

Next is Heroes, a bit slower tempo but just as melodic and enjoyable. In addition to Williams exceptional lead vocals Bill Champlin and Jason Scheff of Chicago provide exceptional background vocals along with Joseph's wife, Amye.

On track 3 Joe shifts gears with a cover of Paul Davis's Cool Night a song that speaks to chilly fall nights with amber leaves and cups of cocoa. Bill Champlin provides exceptional and very noticeable background vocals and Jason Scheff colors the song with his exceptional bass chops. And as much as I love Davis's original, I've come to love Williams' version just as much-- if not more.

The title track, I Am Alive, was built around by a drum loop recorded by Williams' former bandmate by Jeff Porcaro before his untimely death in 1992. So even 4 years after his passing, Jeff Porcaro was able to get a drum credit from beyond the grave. It gives the song a little extra something special as it also features some background vocals from Toto's original lead vocalist, Bobby Kimball.

The album is rounded out by a handful of other excellent songs. Babylon is a catchy mid-tempo song. The lyrics aren't great but Williams' vocal delivery elevates the mediocre lyrics and makes them enjoyable. Unarm Your Heart again features Bill Champlin providing very exceptional background vocals in counterpoint to Williams'. The vocal chemistry shared between Williams' and Champlin is perhaps second only to the vocal chemistry Champlin shared with his own former bandmate, Peter Cetera on Chicago 16 & 17. On top of that the vocals are uplifting and positive:

One of the best songs on the album is Out of Harm's Way:

The song is a celebration of new love. Those over the top highs of happiness you feel for that special someone when you first start falling in love with him/her. The melody is catchy and thoroughly enjoyable.

The original version of the album closes with I'd Rather Dance By Myself which borrows a page from the John Hughes film Some Kind of Wonderful. There's a scene where Amanda Jones (played excellently by a young Leah Thompson) says, "I'd rather be alone for the right reasons than with someone for the wrong reasons." I'd Rather Dance By Myself is the same idea-- you don't need someone else in your life to define who you are.

A later release of the album includes 2 bonus tracks Never Let You Go and Afterlife. Never Let You Go has a similar vibe to Out of Harm's Way and I Believe in You whereas Afterlife is an instrumental piece that offers a bit of a demonstration of the television scoring that Williams' had started to do at that point in his career (in the late 90s Joseph Williams wrote and performed the scores for CBS's Early Edition and LA Doctors and the WB's Roswell).

Unfortunately, this exceptional album is now and has long been out of print. It likely didn't help at the time of the release that the album had/has a late eighties vibe to it, making it sound dated even at its original release in 1996. However, the material is excellent and enjoyable despite sounding dated.

If you liked Chicago 16-19, Toto Fahrenheit & The Seventh One chances are you'll love I Am Alive.

Yikers! I liked some of his stuff with Toto and it sounds as though this is a pleasant enough album, but that cover doesn't speak to me at all.

Barely Awake In Frog Pajamas: If you think THAT album cover is bad some of his others are actually WORSE. I interviewed him about 11 years ago and he indicated the Japanese idea of cover art and American idea of cover art are quite different. None of his material has ever been released on CD domestically. Some of his more recent releases have been made available on Amazon.com and/or iTunes as downloads though.