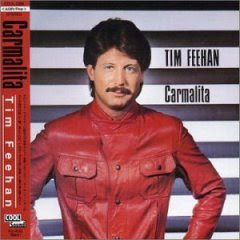 For a moment, remind yourself that this album was released in the eighties and excuse the ever so unfortunate cover art.

Tim Feehan got his start in the Canadian band, Footloose. After achieving moderate success in his native Canada on a small handful of singles, Feehan opted to pursue a solo career.

Feehan has an exceptional voice. It's a cross between Bryan Adams and Richard Marx, although I'd argue better than either of them. Unfortunately, Feehan never enjoyed the level of success of either of those contemporaries.

Listening to his solo material it's not difficult to understand why. Carmalita is pleasant enough from start to finish. It's predominantly mid-tempo lite AOR with relatively catchy melodies however nothing that really sets it apart from any other mid-tempo lite AOR of the same era.

All of the songs are enjoyable and Feehan's voice is consistently strong and very easy on the ears. But none of the songs stick out. His duet with Vikki Moss, Never Say Die (Moss also did a duet with David Foster, Love at Second Sight and was featured on the song If I Turn You Away from the St. Elmo's Fire soundtrack)features strong vocals by both Feehan and Moss but the music seems phoned-in and generic. It does no favors to Feehan.

With stronger material and more passionate music from the session cats backing him up, Feehan's career might have gone on a much stronger trajectory than it did. He certainly had the vocal chops to have had a much more successful career than he ended up having.

Instead Carmalita remains an out of print curiosity of mid eighties Canadian pop. In fairness, Feehan's follow-up albums did show substantial improvement, but those are other reviews for other days.

The 80s hair and clothes have not aged well, not that they were all that great to begin with.