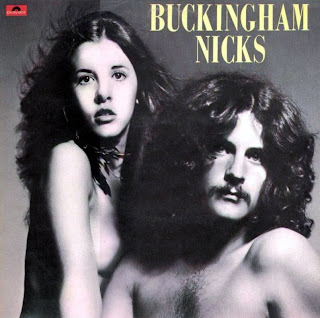 From the opening bars of Don’t Let Me Down Again the seeds for Fleetwood Mac’s Rumours can be heard plain as day. Even outside the context of Fleetwood Mac, Buckingham Nicks is an absolute joy to listen to. There’s something special about hearing the seeds of something great before they were sown.

Before they broke it big with Fleetwood Mac Lindsey Buckingham and Stevie Nicks released Buckingham Nicks in 1973. Unfortunately, the album flopped and the dynamic duo were dropped by their label.

Any or all of these tracks would not have sounded out of place on a Fleetwood Mac album. The vocal harmonies are tight, the music is rather laidback and the whole vibe is vaguely reminiscent of the vibe on America’s Ventura Highway. I can feel the warmth of the sun and the soft carpet of grass underneath my bare feet in most of the songs. This is a rather welcome feeling on days when the outdoor temperature is hovering closer to zero and that soft carpet of grass is covered with a blanket of snow.

On Lola (My Love) Buckingham’s fretwork is reminiscent of his later work on Fleetwood Mac’s The Chain. While the lyrics to the two songs are drastically different, the guitar is uncannily similar leaving me wondering if Lindsay either intentionally or unintentionally plagiarized himself (is it still plagiarism if you’re lifting material from yourself?—I guess that’s a different discussion for another time).

From the perspective of a music buff, the standout track is Frozen Love as that’s the song that impressed Mick Fleetwood enough to ask Lindsey Buckingham not only to join Fleetwood Mac, but also agree to Buckingham and Nicks being a package deal and asking them both to join the band. It's almost trippy to imagine oneself being Mick Fleetwood hearing Frozen Love for the first time, impressed and excited about the prospective new guitarist... and at the same time having no idea of the kind juggernaut the addition of both he and Stevie Nicks would be for his band.

Sadly this album is still (as of 2009) yet to be officially released on CD. It was originally released on vinyl in 1973 and briefly re-released in 1982 on the cusp of the success of both Nicks and Buckinghams respective solo careers. It remains one of the most heavily bootlegged albums of the seventies.

Perhaps the music industry would be better served using their resources to release and promote excellent out of print albums like Buckingham Nicks than it is retaining attorneys to sue their customers for illegal downloads. But that too is another discussion for another time. One of the other most heavily bootlegged albums of the seventies was Dennis Wilson’s Pacific Ocean Blue. That album was finally released on CD within the past couple of years, so maybe there’s hope for Buckingham Nicks yet!

I've heard of this album, but I never heard it. After reading this review, I WANT to hear it. Maybe someday I will.

Ahh, Stevie and Lindsey! Perhaps my favorite two people ever to sing together. :)

Words can't express how much I love this album. It's that one album that almost nobody has heard, yet they've heard of the two artists.
I have a promo poster for this album that came out in '77 after Rumours was released that says "Do you like Rumours?" and then "Did you know that SN and LB made an album before they joined Fleetwood Mac?"

Thank you for talkin' about this! :)
And yes, Drew, you need to hear this one! It's a keeper.

I agree with classic above... Definitely a great pair to hear together ! But I haven't heard all of the songs in this album, and me too am really looking forward to watch them on youtube for sure ! Thanks Perplexio !

Last time I saw a copy of this album (a couple yrs ago), the store wanted $20 4 it, & I shoulda grabbed it.
4 me, the mournful "Without a Leg to Stand On" & the very Mac-ish lead track "Crying in the Night" R the best things here, but the whole 1st side's great, & "Crystal" was of course re-made by the Mac -- tho I think this version is better!
As 4 why this isn't out on CD yet, rumor has it Lindsey Buckingham has blocked a CD release, tho Ghod knows why, there's certainly nothing here 2 B Mbarrassed by. & the Mac was still per4ming "Don't Let Me Down Again" as late as 1981, as documented on their 2-disc LIVE album. Thanx 4 another great choice.... -- TAD.

Drew: It is quite enjoyable. As Tad stated in his comments there's nothing for either Lindsey or Stevie to be embarassed about. The material on this album is all quite strong.

classicrockforthesoul: It's a pity that it's yet to be officially released on CD. The material on it is quite strong and enjoyable.

bearockr: Good luck in your quest to find more material from this album. If you need any assistance in your search drop me a note, I'll see what I can do.

Tad: Couldn't agree with you more about there being nothing on this album to be embarassed about. It's all quite good. It's similar to the tale with Dennis Wilson. I read that after its release Dennis Wilson really distanced himself from Pacific Ocean Blue. I really can't understand why as it was a great album. I'd argue it's one of the best solo albums put out by any of the Beach Boys. It's certainly stronger than both of Carl Wilson's solo albums and its also stronger than some of Brian's weaker material and at least as good as Brian's better material.

I don't get these artists being embarassed by or wanting to distance themselves from such good music.

Great album and I love the cover.

If I may take up some more room here, Plex... since Barb mentioned she loved the cover, I thought I'd share the story about it. :)

In Stevie's own words:
[Lindsey and I] were really poor when we took that picture, and I went out and spent my last $111 on a really beautiful, very sexy blouse. And they agreed to do half the session in the blouse, and I thought 'Oh, I'll win. They'll love this blouse, and they're gonna love the way I look.' Well halfway through the session, one of the photographers came over and said, 'Okay, it's time to take off the blouse,' and I died. it was awful, you know...."

But yes, I love how her feather earring is the only part in color! Very cool.

Hi and thanks for commenting on my blog! I see some familiar names here--Drew, dear Barbara, and my friend Classic Rock Girl. Now I know where the cool kids are hanging out!

It's funny, I didn't know what to expect when I landed here, and I sure didn't expect to see the old Buckingham Nicks album my boyfriend (and eventual husband and father of my kids) gave me when we were students at SUNY Plattsburgh. I thought that was a great album! (I know you know Plattsburgh, Malone boy!)