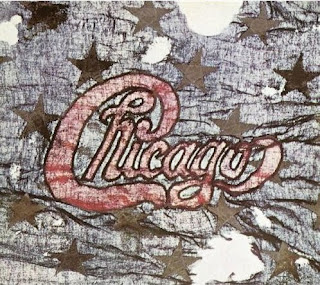 How many bands do you know of that have released three consecutive double albums within the space of two years? Between 1969 and 1971 Chicago released 3 double LP studio albums and a quadruple LP live album. That's the equivalent of 10 albums worth of material in less than 3 years! It's a staggering musical statement by any estimation.

And while later albums certainly displayed glimpses of the creativity and musical talent of this period in the band’s tenure, none of them quite matched the consistently high quality of the first three albums.
Chicago III starts with Sing a Mean Tune Kid, a musical tribute of sorts to those which came before them and paved their way. It features a blistering guitar solo by Terry Kath, not to mention it exhibits a strong musical chemistry between Kath’s guitar and the keyboard/organ playing of Robert Lamm.

As Sing a Mean Tune Kid fades out it’s replaced by Loneliness Is Just A Word, a song the band had been playing since their days paying their dues on the Chicago club scene prior to their move to Los Angeles. The Chicago III version is of course considerably more polished and well rounded than the earlier version, thanks largely to the superlative production of James William Guercio.

Perhaps what sets Chicago III apart from their debut or Chicago II are the occasional country-influenced flourishes on songs like What Else Can I Say or Flight 602, perhaps giving the clearest example of the direction Peter would inevitably steer his career following his departure from Chicago. Terry’s guitar also shines front and center a few tracks later on I Don’t Want Your Money.
On the remastered 2002 Rhino re-release, Peter Cetera’s bass playing is particularly audible (incidentally, Rhino did an excellent job on bringing Peter’s bass-playing closer to the front of the mix on all of their Chicago re-issues).
Much like on Chicago II which featured the multi-part It Better End Soon anti-Vietnam anthem and the Ballet For a Girl in Buchannon (the latter of which spawned two of Chicago’s more memorable hits, Make Me Smile and Colour My World), Chicago III features the multi-part Travel Suite, An Hour In the Shower, and Elegy. All three pieces have their moments, Travel Suite features a fast-paced Danny Seraphine drum solo, Motorboat to Mars, the aforementioned country-tinged Flight 602, the live staple Free, At the Sunrise would not have sounded out of place on a latter day Beatles album with the McCartney/Lennon-esque vocal chemistry of Robert Lamm and Peter Cetera being the hallmark of the piece. But perhaps the strongest part of the Travel Suite is the underrated instrumental gem, Happy Cause I’m Going Home which features some of Terry Kath’s better acoustic guitar playing marked a soft counterpoint to his heavier electric guitar work on other tracks and truly displayed his versatility. Add to that there’s enough cowbell to make even Christopher Walken happy. The band was truly exploring and utilizing the studio space with the cowbell. To this day Happy Cause I’m Going Home remains one of my favorite Chicago album cuts. The song starts with the trademark layered approach that had become a staple of many of Chicago’s earlier songs, Terry counting them in, starting with his acoustic guitar, followed shortly by Peter’s bass, and shortly after Peter comes in, Danny’s drums before the rest of the band joins the rhythm section. There’s a scat vocal throughout that dances around the instruments and is an instrument in and of itself. And despite not being as well known as his solos on Colour My World or Just You & Me, Happy Cause I’m Going Home has perhaps the best flute solo Walt Parazaider ever recorded (although his solo on the Live At Carnegie Hall version of It Better End Soon would also be in the running for that honor). His solo is syncopated with more cowbell, some solid drum fills by Danny Seraphine, and some of the most melodic bass playing that Peter ever laid down.
The band takes a brief break with Mother and Lowdown before launching into An Hour In the Shower. Both songs are enjoyable, Lowdown has some decent guitar work by Terry even if he didn’t personally care for the song, he still put his heart into it.
An Hour In the Shower is perhaps the most unusual song ever recorded by Chicago. Instrumentally it’s as good as anything else on III (or II or their debut for that matter), but paying attention to the lyrics one might be left scratching one’s head. The song is by and large an ode to a morning routine (“Now I usually have my breakfast which consists of tasty Spam, Yeah, I could eat it all day long, But I only love one brand, and I can’t find it way out here, So I’ll have to take a pass, settle for some hash, what a drag, you’re not here, Oh sweet sweet Spam”), masturbation (“Now I lay me down to sleep, and I dream of my treasure map, it shows me where my maypole’s buried at, and I dream of all the fun I have when my maypole comes out to play” and later “Just reach underneath your bed, and turn on your electric friend, yeah, and turn your thoughts to me, cause you know where I’ll be, and you can join me in my hour in the shower”), and environmentally unfriendly water consumption (Terry sings of both starting and ending his day with hour long showers—2 hours in the shower a day!)
Following the perpetually amusing Hour In the Shower the album takes a decidedly pretentious turn with Robert Lamm reciting the Kendrew Laschelles poem, When All the Laughter Dies in Sorrow which opens the third and final multiple part musical piece on the album. Once Upon a Time features another thoroughly enjoyable flute solo by Walt Parazaider before James Pankow offers an equally enjoyable trombone solo before both Walt and trumpeter Lee Loughnane come in. The horns eventually blend into a cacophony of noise that fades out as the sound of car horns fade in along with the sound of jackhammers and other unpleasant reminders of modern life. The car horns and jackhammers crescendo into a toilet flush and the piece ends with the instrumentals The Approaching Storm and Man vs. Man: The End.
While not as consistently strong as their debut nor as polished as Chicago II, Chicago III was then and remains today a thoroughly enjoyable album. It remains one of the most creative albums in their rather extensive catalogs and while, Elegy may have been a bit of a “miss” for me, credit has to be given for having the stones (of Sisyphus?) to try something so outside the norm. And, Elegy, to me, is the lone “miss” on an otherwise excellent album.
Related Links

"Happy 'Cos I'm Goin' Home". Yes, love that too very much. Terry's acoustic guitar playing here and in "Byblos" of VII is some of my absolute favorites. In fact for me the whole Chicago III album is more enjoyable on many levels compared to Chicago (II). "Once Upon A Time" is a beautiful piece in the Elegy suit I think. Shows Pankow's potential to do music for films. "Free" is also a fave. It never sounds monotonous, although I wish it ran longer, with the extended horn instrumentals, like in the live concerts in those days (e.g in the Carnegie Hall album).

Thank you for your review. I hope more people will be interested now to get a copy of this rather unpopular Chicago album.

Lowdown is the only track that i have heard from III. I'm going to hunt for the vinyl version of this one. I might be wrong, though I can't think of anyone else who has put out three double sets in a row.

To me this album is the oddest in Chicago's discography and although less of a classic than the two that preceded it, it is still excellent nonetheless. While "Free" and "Lowdown" were both top-notch singles they are seldom heard on radio today and therefore are more obscure to the casual fan than their earlier hits. The main drawback is too much filler that appears to be included only to stretch this release into another double album. Some editing of this LP would have helped. While not bad, "Motorboat To Mars," "Free Country," and "Progress?" are classic examples of this unnecessary filler. On the plus side, III is the band's most jazz oriented LP to date. "Happy 'Cause I'm Going Home," "The Approaching Storm," "Mother," and "Loneliness Is Just A Word" are all jazz influenced pieces that really show off Chicago's willingness to try everything. Because this LP has both the extended jams of Chicago Transit Authority & the suites of Chicago II it has some of the personality of both of its predecessors and thus appears less focused.

Fits in with the rest of the song's general theme of indolent debauch.

The reference to Spam is not about food or pot. At the time Terry was married to his wife Pam. Now read the lyrics with that context.