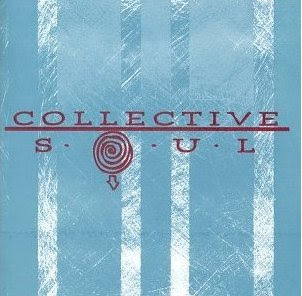 I'm not sure whether or not it's a glitch in my musical wiring but unlike many of my peers, grunge music never really spoke to me. I tried to get into it, I really did. But I just never connected with the likes of Nirvana, Stone Temple Pilots, Pearl Jam, or any of the other bands that were spawned by the influence of those bands.

I just didn't see what white suburban kids had to be so pissed off about. Our standard of living was generally comfortable we weren't mired in an ever escalating police action half a world away, there was no draft.

As a freshman in college my roommate had Collective Soul's s/t sophomore release. He'd play it from time to time and bloody hell, wouldn't you know it, I had a reason to remove my head from the sand. I had reason to acknowledge the music of the 90s.

From start to finish this album is (pardon my French) fucking brilliant. While there are other albums that I enjoyed bits and pieces of in this era. This one grabbed me by the cojones and my heart and mind followed eagerly. It took the best aspects of classic rock and hit the fast forward button to the nineties to give a then modern spin to a classic sound and Collective Soul pulled it off in spades.

Whether it's Smashing Young Man, December, Where the River Flows, The World I Know, or the perpetually catchy Gel this album has a little something for everyone. And if you were to only ever purchase one album per decade, I'd argue that this would be a serious contender for THE album to purchase for the nineties.

And while Collective Soul has released a few other decent albums since this one, none of them have quite matched up to the musical brilliance of their sophomore release. All of the pieces just fell into place in just the right way-- like throwing a jigsaw puzzle into the air and having it land with all of the pieces fitting together as it landed. Lightning in a bottle is usually only captured once in a musical career. This is Collective Soul's lightning. Uncork it and intoxicate yourself already!

Posted by Perplexio at 5:43 PM

I love this album! Actually, I love the first two! I must of played the hell out of this album. I agree that Collective Soul suffered a bit of mediocrity since this album. That hasn't swayed my interest for CS.

A serious contender for THE album for the '90's? I don't know, too many too pick from...

I was pleasantly surprised when I heard Collective Soul's first album as I hadn't been wowed by the singles (as popular as they had been).

Their second album definitely was a keeper, too. The World I Know is always welcome to pop up on shuffle.

Hi, I just found your blog. This is one of those albums I listened to all through my college days, 1995-99. So many memories. Love this album. - Tom

Drew: This and Dosage (1999) are my favorite Collective Soul albums. But I do enjoy much of their material.

Barely Awake in Frog Pajamas: Other than Shine I was a bit underwhelmed by their debut, and admittedly I kind of thought they'd be a one-hit wonder with that. I was pleasantly surprised when they released their s/t sophomore album. Some bands have a sophomore slump-- Collective Soul had a sophomore surge.

Tom: I was also in college from 1995 to 1999. So it looks like we went to different colleges together. I tend to associate this album with my freshman and sophomore years of college.

I fell in love w "December" as soon as I heard it back when. "The Life I Know" is also a favorite. "Shine" grew on me, tho it was a bit overplayed on the airwaves.

Jessica: I fell in love with the song Gel the first time I heard it. I also thoroughly enjoy Smashing Young Man and Where the River Flows. Like you I thought Shine did get a bit overplayed on the radio.