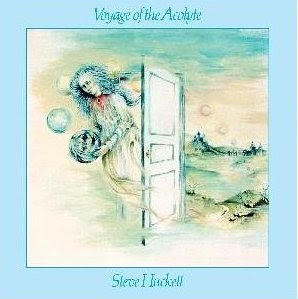 Released while he was still in the band, Steve Hackett’s debut solo album, Voyage of the Acolyte, is the Genesis album that wasn’t. Even the cover art is reminiscent of the style used on the covers of Foxtrot and Selling England By the Pound. Following Peter Gabriel’s departure from the band after the over-indulgent The Lamb Lies Down on Broadway Hackett released this hauntingly beautiful album in which his remaining Genesis bandmates Rutherford, Collins & Banks contributed to in various ways shapes and forms.

The album at different times offers glimpses into what the post-Gabriel Genesis would sound like (at least initially) and at other times shows glimpses of what Genesis COULD HAVE sounded like following Peter Gabriel’s departure had Hackett been granted more creative control on the first two post-Gabriel studio albums (A Trick of the Tail and Wind & Wuthering). Instrumentally the Genesis influences are so unmistakable that one might be left wondering if some of this material might have ended up on a Genesis album had Peter Gabriel NOT left.

Hands of the Priestess Pts. 1 & 2 features some beautiful flute solos reminiscent of Peter Gabriel’s solo in Firth of Fifth (from Selling England By the Pound). And throughout, Hackett dares to defy the stereotype that progressive rock lacks emotion. There’s a poignant beauty throughout both pieces that leaves the listener wanting for more.

A Tower Struck Down is more a preview of the musical offerings that Hackett would release following his own departure from Genesis a few years after Peter Gabriel than anything Genesis might have recorded during or after Gabriel’s tenure in the band.

Star of Sirius features guest vocals by Phil Collins and would not have sounded out of place on A Trick of the Tail. Hackett’s guitar is gentle and understated allowing Collins vocals to carry the song and at the same time providing a gentle accompaniment to those vocals.

The album closes with Shadow of the Hierophant a nearly 12 minute epic that starts softly and gradually crescendos with increasing intensity and volume before fading to silence in a gentle anti-climax.

For fans of the classic Peter Gabriel era Genesis this is a must have. It’s largely a musical bridge between The Lamb Lies Down on Broadway and A Trick of the Tail. While predominantly instrumental the musical themes have a distinct Genesis sound.

Posted by Perplexio at 5:52 PM