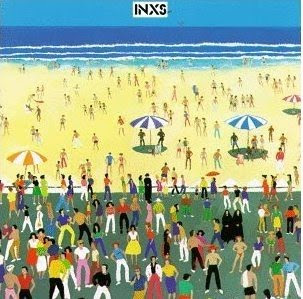 In 1980 long before they hit it big worldwide, INXS released their self-titled debut album. While most of the material on this album would be unfamiliar to all but the most die-hard of INXS fans there is something about the music that makes unmistakably INXS. There’s a cohesiveness and chemistry in the band and you can even hear the beginnings of Michael Hutchence’s self-assured front-man swagger in his vocals.

What is perhaps most remarkable about this release is the strength of the material. While INXS hadn’t yet found their sound, indeed they seem to be trying a handful of different musical styles on this release to determine which they were most comfortable with. It’s perhaps that adventurousness that the album owes its strengths.

On the flipside, the greatest strength of this debut is also one of its greatest flaws. Because the band was trying so many different styles they never fully invested themselves in anyone of those styles. And while you can hear the band’s cohesiveness on each individual track, as an album the material is so varied there’s a lack of that cohesiveness spread out over the album as a whole.

This album is a definite testament to INXS versatility and musical ability and just about any of these songs could have been released as singles but without a commitment to any specific direction the album lacks any direction at all. Thankfully the band would later find that direction and become a pop music juggernaut worldwide a few years later.

Generally this release would only find fans either in the most die-hard of fans or with those truly curious of the band’s evolution. If you’re one who is familiar with INXS’ hits there are glimpses of that kind of material in songs like In Vain, Roller Skating, or Body Language but for the most part the material on this album is considerably different from the INXS you’re likely familiar with.

Posted by Perplexio at 5:47 PM

I like this disc. After Listen Like Thieves came out, I went backward and discovered that they had issued stuff before this. Though KICK was the big one for them, I liked the earlier releases much better.

INXS-One those guilty pleasure bands that I like. (along with Prince) I was really into them in the early '80's when I was hanging out in the nightclubs. I dug the living hell out of "Listen Like Thieves". I think this is the only album that I don't have from them.

Sean: It is a great disc but I think Shabooh Shoobah is a little bit better, especially Don't Change.

drew: It's worth getting just to hear the band in their humble beginnings.

To both of you-- if interested I've got a live radio broadcast of a concert they did in Sydney in 1982. Just let me know if you're interested and I'll see what I can do.

I had a friend who really got into INXS with The Swing and quickly snatched up the pre-Shabooh Shoobah stuff. I think that there were two releases that he had to snag as imports.

I can't really remember those records (though he played them plenty for me). I do seem to recall them being pretty manic.

AWESOME review. I have never heard this, can you believe that? Huge INXS fan that I am?

I don't know why Drew refers to them as a "guilty pleasure" as if there is something to be ashamed of. I am proud to say I love both them AND Prince.