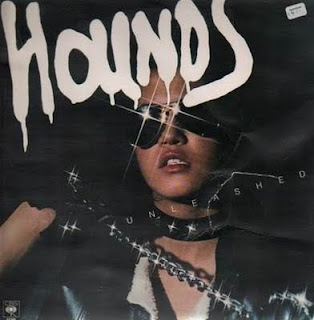 It's 1977.  You're at Just Angels Lounge in Harvey, IL.  The floors are sticky and the stench of cigarettes & stale beer hangs like a fog in the air.  You're packed like a sardine with the rest of the standing room only crowd near the restrooms where the ammonia stench of the urinal cakes has your eyes watering.  The bar is packed and the audience is waiting for The Hounds to take the stage.

The Hounds were a mainstay of the south-suburban Chicago bar scene in the late seventies.  Led by the charismatic keyboardist/vocalist, John Hunter the Hounds performed a lively brand of late seventies hard rock with tinges of glam mixed in.

Hunter would take the stage dressed in a silver jacket, ratty old jeans, and a handcuff dangling from his right wrist.  And given their local popularity the Hounds played to packed houses.

Truth be told, I'd never heard of these guys until quite recently.  A colleague of mine had the pleasure of seeing the Hounds live in the late seventies before they signed their recording contract.

After a bit of investigation I found a high quality rip from vinyl of Unleashed.  From the opening bars I felt my feet sticking to the floor, my eyes watering from that ammonia urinal cake stench, I smelled the cigarettes and stale beer.  I was instantly transported back to the Just Angels Lounge.

The Hounds were a band that wore their influences somewhat on their sleeves but mixed those influences together in a way that was distinctly their own... Whether it's the Mott the Hoople tinged When the Boppers Turn to Rockers the suggestions of David Bowie on Janeane Tangerine or even John Hunter channeling Mick Jagger on I'll Be Your Magic Man you get a fun album full of delightful seventies musical influences.

After listening to this I find it a pity that the Hounds only released 2 albums (Unleashed and Puttin' On the Dog) and unfortunately they never released any live albums.  While Unleashed is thoroughly enjoyable it only hints at the band's showmanship.  It lacks the energy and the chemistry between the band and the audience that was present in their live shows.

That being said, if you're looking for an excellent sample of late seventies hard rock nostalgia you really can't do much better than Unleashed.  Try it, you won't be disappointed.

I use to live in Illinois and I did hear them play. I thought they were pretty good myself. I never knew that they put out any albums thanks for letting me know. I will have to check that out.

What a great local band for Chicago.

Great to hear the tunes again!

I went to high school with the drummer,John Horvath, and roadied for them off and on for almost 5 years. The "Unleashed" album was terrible compared to a live "Unconcert" that WMET broadcast before they went into the studio. Their following was such that they headlined a club show in the Northwest suburbs with Cheap Trick warming them up.

I'm from Pittsburgh and they had some fans here as well. We discovered them because somebody saw the album in a record store and liked the cover.

I saw them at the International Ampihtheatre in Chicago when they opened for Foghat about 1978. I bought their album as soon as I found it at Flipside. Great music.

I never heard of them until I saw them open for The Babys & REO in Louisville. Hard rocking band with one of my favorite concert lines ever: Fuck that disco shit, let's rock & roll!!!

I saw these guys in Memphis in the late '70's. The were the warm band up for somebody (Foghat?) and they ROCKED! I remember that they had a HOUNDS logo in place of the Marshall logo on the front of their amps.

Yeah I used to see Cheap Trick as an opener back in their sloppy days. Can't remember if I've seen the hounds or not up in Wisconsin I do have their album I can't remember. Need to see some video footage of them somewhere

Yeah I used to see Cheap Trick as an opener back in their sloppy days. Can't remember if I've seen the hounds or not up in Wisconsin I do have their album I can't remember. Need to see some video footage of them somewhere

I saw that '78 show opening for Foghat in Chicago as well. As I remember it, they had the Hell's Henchmen motorcycle club providing "security" backstage. They rocked it pretty good for a warm up band.

Did anyone else hear them at Pointe East? (near Chicago).

I saw The Hounds at McCormick Place and at a Chicago Heights club where they showed up after 11pm for a 9pm show. Loved The Hounds! The late 70s really rocked!

I used to hear them bark.

Saw their show at the College of DuPage in Glen Ellyn in '79 shortly after "Puttin' on the Dog" came out. They got a lot of airplay from that album in Chicagoland at that time. I believe that was my first "real" concert...