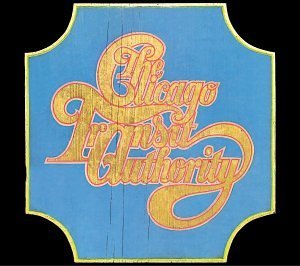 So I'm listening to Chicago Transit Authority-- which has been one of my favorite albums since I was about 14 or 15. This was the first and only time Chicago recorded live in the studio as a group. I've read interviews with sound engineers and the guys in the studio saying that recording this album was a nightmare. Getting 7 guys to come together "just so" required an obscene amount of takes.

When this album was released, no one outside LA and Chicago had heard of these guys, and even those from Chicago may not have even realized it was the same group they had known as "The Big Thing."

These were wet behind the ears guys, younger then than I am now. They gave up their royalties so they could get this double LP debut released back in 1969.

They weren't popular yet, they didn't have over 100 million record sales worldwide yet, they weren't the hit machine they would become in the mid-70s and into the early-80s. They were just making this music for the love of the music and because they believed not only in themselves but in the music they were creating.

I could be wrong, but I believe this album didn't chart until after their 2nd album was released a year later.

On one of the days that this album was being recorded, most of the band was taking a break. Guitarist Terry Kath, opted to just stick around the studio and mess around on his guitar. I mean he just went totally apeshit. One of the sound engineers decided to roll tape on it and caught one of the most brilliant "love songs" ever. It's not so much a song, as it is Kath making love to his guitar in a 6+ minute free form jam that at times sounds more like a motorcycle wreck than anything resembling music. But what comes through his intense free-form jamming is a level of energy and passion for his guitar that no structured song could ever really capture.

Chicago's first 3 double LP studio albums and their 1971 4 LP (3 CD) Live at Carnegie Hall album contain some of their best, and most experimental music. It was all recorded before a concerted change in the band, a change that saw them shift from experimenting to trying to score hits. There are diamonds in the rough of some of their later albums. But Chicago Transit Authority, Chicago II, Chicago III, and Live at Carnegie Hall all have a certain magic to them... and there's just something about this debut, the start of something magical, 7 guys making music they love for the sake of the music, not for the sake of selling records.

*This post originally appeared on July 21, 2004 in my Livejournal blog.
Posted by Perplexio at 1:23 PM

I love this review! I need to get this music, I don’t have it, just some of the songs. Your passion for music is so inspiring. I hope it causes people to check out music they may have never given a thought to before – or even knew about.

Dig your comments on my blog, thanks! I wrote this back to you over there but will write it here too:

Perplex, One of my favorite songs is a little known tune called "I Love The Night" by Blue Oyster Cult. Have you heard that one? Kind of a love song/ballad. When I listen to it I can actually feel a cool damp breeze across my skin.

I can not WAIT to go check out your lists later, I like that term "aurgasm" did you make that up? I love it….you need to copyright that word if you made it up, dude, it’s perfect to describe what music does to some of us…My ex-boyfriend was not into music….kinda says a lot about why he’s my ex.

Check my blog out at http://overheardinchicago.blogspot.com/

I'd love input on the daily's you may hear around our great city and surrounding areas!

I agree with everything you say except about "Free Form Guitar" which is a waste of vinyl. I also think you could add Chicago V as one of their alternative eclectic albums. IMHO the change didn't begin until VI.

VI was rather poppy but VII was a great mix of jazz and pop.

I actually really like Free Form Guitar but I feel it would have fit better at the end of the album than right in the middle. I think its placement kind of shunts the album continuity.

I still remember being floored the first time I heard this album. I could scarcely believe that the same group that recorded You're the Inspiration and Hard Habit to Break also recorded this album!

I picked this up. Great review and recommendation!

It is a classic rock gem, and if Chicago were judged on this and their 2nd and 3rd album instead of their eighties power ballads they would be in the Rock and Roll Hall of Fame today.

Very few bands have tarnished their own legacy as fully and completely as Chicago.

It doesn't help that Rolling Stone editor Jann Wenner is on the RRHOF nominating committee. He hates Chicago with a passion. I think part of it has to do with a Peter Cetera quote from the 70s, "Yeah I read Rolling Stone, usually when I'm taking a shit."

Also late guitarist Terry Kath apparently pissed off many UK critics in the early 70s when he made some rather derogatory remarks in response to the lack of recognition he got in contrast to the overabundance of attention he felt Jimmy Page and Eric Clapton were getting.