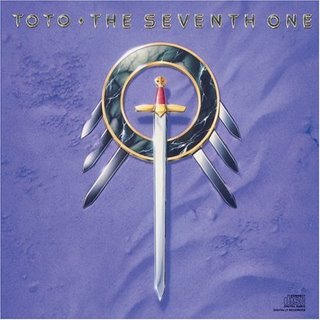 Toto has delved into a myriad of different musical styles, but in the eighties they seemed to have their fingers firmly planted on the pulse of pop music. But even when focused on pop music, Toto's music was leaps and bounds above much of the other pop music of the era.

While 1982's IV swept the Grammies and is thus much more well known, The Seventh One is at least equal in quality if not superior due to it's pristine production and a greater sense of musical adventurousness-- integrating steel drums, Spanish guitar, and other musical styles and elements not traditionally heard in pop music.

In 1984 Toto parted ways with lead vocalist Bobby Kimball. After being turned down by Mr. Mister vocalist, Richard Page, Toto settled on Fergie Frederiksen. Unfortunately, due to Fergie's difficulties in the studio, he only lasted 1 album (Isolation) and 1 tour (1985) before Toto opted to part ways with him as well. One of the vocalists they approached, Jason Scheff, had already gotten a gig-- replacing Peter Cetera in Chicago, but he did recommend a tenor vocalist, Joseph Williams, who he was familiar with.

The Seventh One is one of those rare albums where each track is inherently catchy, where the hooks get under your skin and get your toes tapping, hands clapping, or fingers snapping. Drummer, Jeff Porcaro, once again proves his worth as one of the best groove drummers in the industry. Toto even borrows a horn section for several tracks (including Chicago trombonist, James Pankow on the lead-off track, Pamela)-- it could even be argued that Toto was more comfortable with using a horn section in the eighties than their contemporaries, Chicago, as evidenced largely by this album.

The vocal harmonies are tight as always (and borrowing another page from Chicago, Joseph Williams lead vocals are layered with his background vocals-- much like Peter Cetera used to do with Chicago), Steve Lukather's guitar chops seem a bit more crisp as having Joseph singing lead allowed him to concentrate more on his guitar.

Standout tracks include Pamela, Stop Loving You, Mushanga, Anna, and the anthemic Home of the Brave which has become a favorite at Toto's live shows in recent years.

In short, if you enjoyed Toto IV, you'll be pleased as punch with The Seventh One as it uses the same pop-friendly foundation as IV and takes it to another level.

I only had one of their albums, I can't remember the name, it had a loose outline of a horse on the cover. I LIKED that album, the whole thing, not just some songs. I shall have to replace it some day. I haven't kept up with their music since about 1981. Was it "Legends"?

Many of Toto's album covers feature a sword (their first, second, fourth, and seventh albums in particular), a few abstract art (their third, fifth, and ninth albums), and they have a few album covers that are just unique in general.

Hi Perplexio! I'm Robert from Poland and I'm great Toto fan. I have many their music and this album is very, very beautiful...
Thank You very much